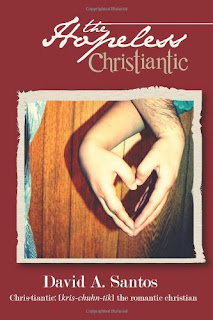 1. What is your name, where were you born and where do you live now?
In a Hospital and in an apartment ha. Nah I was born in Chicago, Ill, now live in Milwaukee. WI

2. What is the name of your latest book, and if you had to summarise it in less than 20 words what would you say?
The Hopeless Christiantic.....in 20 words? Hmm? Drama drama drama! Lots of drama, a romance comedy.. Guy wants girl. Friend wants girl too. Friend blackmails friend to date sister. How I managed to untangle that mess surprised even me!

3. Do you have plans for a new book? Is this book part of a series?
I am actually working on book 2 with the same characters. More religious though.

4.How long have you been writing?, and who or what inspired you to write?
A year and un-employment inspired me to write! ha

5.  Have you ever based characters on people you know or based events on things that have happened to you?
The book is fiction, however some friends thought the characters were based on them. Some got offended ha, but I see that as a compliment, that means I made the characters that realistic. Towards the end its similar to what I have been through, other than that everything else is make believe.

6. Is there a certain Author that influenced you in writing?
Joel Osteen while not a fiction writer, I started to write listening and reading  his sermons

8. What do you think about book trailers?
Their a pain in the caboose For an amateur like myself its tough to find video that isn't copywrited and music that sites like youtube won't mute it over. It's a real challenge. Its pretty much a 20 second commercial.

9. What piece of advice would you give to a new writer?
Be patient. Don't rush through it. Know who your readers are and target them. Most of my friends are Christian and I knew that I'd be in alot of Christian events, so for me to market my book or sell them at those events I had to make the book religious. I can't write an erotica and expect to be able to sell it at a Christian event.

Your blog? http://davidasantos.blogspot.com/ I'm still not sure what the blog is about ha
Your facebook page? http://www.facebook.com/pages/David-A-Santos/214296695286913
Your Goodreads author page? http://www.goodreads.com/user/show/5738922-david-santos
Your Twitter details? http://www.twitter.com/PrincDassyFresh
And any other information you wish to supply?

or the ebook version  http://www.goodreads.com/book/show/11948087-the-hopeless-christiantic
Posted by Jeanz xx at 10:38