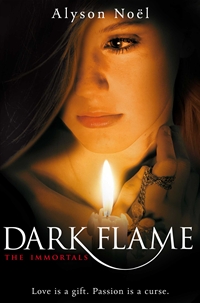 Ever is trying to help Haven's transition into life as an immortal.  However with Haven totally drunk on her new powers and acting recklessly, she poses the ultimate threat of exposing their secret world to the outside world. Ever struggles to keep the Immortals hidden, and Haven propels herself closer to the enemy. The enemy being Roman and his evil companions
frantic to break the spell before its too late, Ever turns to Jude for help, risking everything she knows and loves to save herself—and her future with Damen …
At the same time as all this going on, Ever delves deeper into dark magick to free Damen from Roman’s power. Then her spell backfires and it binds her to the one guy who is totally hell bent on bringing upon  her destruction.Ever now has a strange, pulse coursing through her that is foreign to her. It seems that no matter what she does and how hard she tries, she cannot stop herself from thinking about Roman and even more distasteful she finds herself longing for his touch. Ever struggles to resist the fiery attraction that threatens to totally consume her. With Ever in a weakened state Roman is more than willing to take advantage .The problem is that as time goes by Ever edges closer and closer to surrender. Ever becomes desperately frantic to break the spell before it is too late. Ever even turns to Jude for help, she is willing to risk everything she has, knows and loves to save herself and secure a future with the love of her life Damen. Can Jude help? Will he even want to help?
I suppose you would look at the synopsis above and think wow this book is action packed.....well it has a lot going on but its just all going on too too too long! I felt like I wanted to hurry the story up again, the pace seems to be getting slower as the series progresses it has me at a point where i am thinking do I want to risk trying the next book, but then I want to know the outcome , I want to know if there is the much wanted and anticipated happy ending.
Available from Amazon.com, Amazon.co.uk £3.77 paperback £3.58 on kindle Play.com £4.49 and Bookdepository £3.76
Posted by Jeanz xx at 18:30