Jessica Degarmo is the author of Hooking Up and Decisions among other books. 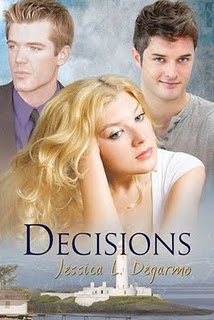 What is your name, where were you born and where do you live now?
My name is Jessica L. Degarmo. I was born in Elmira, New York, and I now live in Millerton, Pennsylvania.


What is the name of your latest book, and if you had to summarise it in less than 20 words what would you say?

I'm the author of five books, four of which are published now. My most recent release is Six Weeks, a YA literary fiction novella. If I had to summarize it in 20 words, I'd say "It's something that every young adult should read before he or she decides to become sexually active. Important and moving"
Do you have plans for a new book? Is this book part of a series?
My latest completed novel will be released by Night Publishing sometime this year. It's called The Storm Within, and if all goes according to plan, it will be the first in a series.


How long have you been writing?, and who or what inspired you to write?
I've only been seriously writing for about a year and eight months. I started to write as a way to make some extra money after my husband was laid off from his job. I was very naive back then. I really thought that writing was a good way to make money quickly! But, I discovered that I had a passion for it, so even though authors don't typically strike it rich unless their name happens to be Steel or King, I plan on continuing. I love it! I also blame, er, I mean thank, a former college English teacher of mine, who told me that I could be a good writer. His encouragement and support have made a huge difference.


Do you gift books to readers to do reviews?
Absolutely! Reviews are important. They let other readers get a taste and a feel for a book, and all authors crave feedback.


How do you come up with the Title and Cover Designs for your book/books?Who designed the Cover of your books?
It's a process. Usually, I have the titles even before I start writing. I get the basic idea and what to call the book before the real writing work begins. The titles help shape the direction of the books. My covers have been done by my publishing houses, and I couldn't be happier with them. My favorite is th cover for Decisions. Reese Dante did that one, and it's lovely!


Have you ever based characters on people you know or based events on things that have happened to you?
See, that would be telling! I tend to base my characters on traits I wish I had. In one of my books, and I'm not going to tell you which one, I have had a certain thing or two happen to me, but no, my works are 99% fiction.


Is there a certain Author that influenced you in writing?
I love LaVyrle Spencer for her beautiful descriptions and important life lessons, and I love Nora Roberts writing as JD Robb for her crisp, straightforward style and kick-butt lead characters. They both influence me.


Which format of book do you prefer, ebook,hardback, or paperback?
I love paperbacks, but as time goes by, I'm finding that e-books are the way to go for so many reasons. They're better for the environment, they don't deteriorate like my dog-eared paperbacks, and they can be cheaper. Plus there's the immediacy and the convenience of having an entire library able to be held in the palm of your hand.


What is your favourite book and Why? Have you read it more than once?
I have so many favorites! I think that writers tend to be readers, and I've devoured thousands of books. My stand-out favorite would have to be Watership Down. I've lost count of how many times I've read it. It's beautiful, moving, and so important.


Do you think books transfer to movies well? Which is you favourite/worst book to movie transfer?
I think it depends. Some do, some don't. My favorite book to movie transfer has to be the Harry Potter series. However, the books go into much more detail, although the movies do an admirable job in following the plot precisely. I just think the books do a better job of explaining things so the viewer/reader doesn't get lost.


Are there any New Authors you are interested in for us to watch out for? and Why should we watch out for them?
There's a stable full of authors over at Night Publishing who are up and coming. A few of my favorites include Catherine Chisnall, Gerry McCullough, Ian Ellis, Jo Ellis, and Suzannah Burke. But there are so many more. I'd suggest checking them out at www.nightpublishing.com.


Is there anything in your book/books you would change now if you could and what would it be?
Oh, that's a loaded question. Yes. Absolutely yes. There are things I'd change on almost all of them. My first book, although it has some sentimental value to me for obvious reasons, is the one I'd change the most. I've learned so much since that book, and I'd like to think I've grown. I'd probably rewrite half of it!


What piece of advice would you give to a new writer?
Run! Run away screaming! No, I'm only kidding. It's hard work. Every step of the way. The work never stops, not even when you type "The End" on the last page of your manuscript. There's editing, and more editing, and, well, more editing. Then there's the querying. And the rejections. And the querying. And the worry. And the acceptance, which is great, but it means more editing, then networking, then promoting. It's a tough process. But it's worth it. Keep at it, and never stop working.


Your web site ?  www.jessicadegarmo.com
Your facebook page? http://www.facebook.com/?ref=home#!/pages/Books-by-Jessica-L-Degarmo/133702720018415
Your Goodreads author page? http://www.goodreads.com/author/show/4504786.Jessica_L_Degarmo?utm_medium=facebook_tab&utm_source=facebook.com
Your Twitter details? @degarmo2911
And any other information you wish to supply?
My publishers' websites:
www.nightpublishing.com
www.spsilverpublishing.com
www.pfoxchase.com
ThankYou for taking the time from your writing to do this interview, giving us a glimpse of your world as an author.
Posted by Jeanz xx at 12:41