Living Dead in Dallas is book two in the Sookie Stackhouse series by Charlaine Harris. 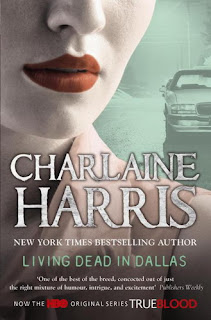 Sookie Stackhouse is a cocktail waitress and seems to be  on a streak of real bad luck. Her co-worker gets murdered and no one seems to care.Next Sookie is attacked - and poisoned - late one night by some weird and apparently mythical beast. Sookie only survives because the local vampires roll up and graciously sucks the poison from her veins.But nothing in life comes for free as in return the blood-suckers need a favour. Sookie ends up in Dallas. The vampires favour is for Sookie to use her telepathis powers to search for a missing vampire.
The books may contain murder etc in them but they are written to contain humour in them too. Some of the silly situations Sookie gets herself into just make you shake your head in disbelief, i mean you would never do the same as her...would you?