A JOB FROM HELL BY JAYDE SCOTT

A Job From Hell by Jayde Scott is book one in her Ancient Legends series. 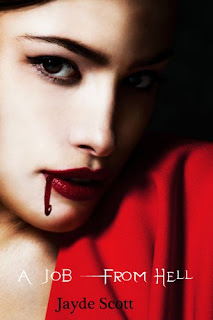 Seventeen-year-old Amber stumbles into the paranormal world by chance when Dallas, her brother, sets her up with a summer job in Scotland. Dallas has secretly seen something in the woods that he thinks could make them rich beyond their wildest dreams. However instead of finding riches, Amber unknowingly stumbles her way into an ancient paranormal race. Amber also promptly manages to win the first prize. The prize is so greatly wanted in the paranormal world that many would kill to have it. Amber, soon discovers her new boss, Aidan, didn’t employ her for her astounding housekeeping skills and he isn't who he claims to be either. Aidan is of course a vampire,as are the beautiful Claire and the humorous Keiran (Aidan's brother)
The surrounding, lurking, dark forces slowly conspire against Amber, her naivety and her increasing love for Aidan catapults her into a calamitous series of otherworldly events. With every immortal creature hunting for her, whom can she trust with her life? Should she really trust Aidan who seems to have feelings for her, or are the feelings he shows towards her merely a way to get her onside to do his bidding? Is Devon the one with her best interests at hurt, how can she tell looking into his deep, dark fathomless eyes. Is Angel a true friend, as she is the only other immortal around? Or is she trying to coerce Amber into doing what the Shadows want? Why is it the only one she seems to trust is Cass, the devils daughter?
I really, seriously, loved this book, it has humour, love and longing, the crazy dead ex, the gorgeous vampires, the sultry shadows, and of course the devils daughter who just happens to be the most direct and honest of the bunch of paranormals surrounding Amber! I enjoyed the suspense, even though you kind of know from the beginning that Aidan is a vampire. I enjoyed the concept of "The Shadows" they were a different kind of paranormal being than I have read before. All the twists and turns kept you wanting to read and puzzle along with Amber as to who she should really trust. I won't reveal spoilers but I will say at the end the book is left in such away that Amber is starting a whole new way of life, so there's plenty of scope for more Amber. Though I loved all the other characters too, maybe books from their points of view and their stories of how they came to be and now "live" would also be great.
I of course would recommend this series to fans of  Charlaine Harris , Mary Janice Davidson , Dakota Cassidy, and Michele Bardsley this book is kind of Chick lit with a bit of bite thrown in ! (if you'll pardon the pun!) Definitely want to read more of Jayde Scott's books.
And remember folks this book is one of the Fantastic Ebooks in my Awesome August Giveaway
Also don't forget to check out the Author Interview with Jayde Scott
Available at Amazon.com, Amazon.co.uk £1.14 Barnes & Noble,
Posted by Jeanz xx at 12:32