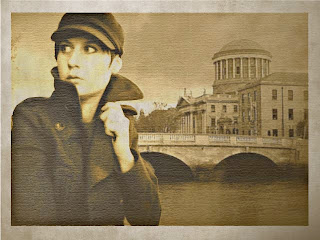 The plaque on my lawn reads the Edgington Mansion, it was once thought to be lovely I suppose, though now rather decrepit and quite full of secrets. I live here with my husband. He is a philosopher, and quite mad. Our house is full of books. Stacked, piled, and always advancing out and away from the shelves that ought to keep them in. I paint and draw, write and read, and occasionally go down into the dark, dismal, cobweb-creepy dungeon, to do laundry.

If interested, you may choose to follow me on my blog or check in with me on facebook. However, due to my absolute terror of electronics and a crippling phobia of the social media (technical term: Socmephobia), my blog posts tend to be infrequent and erratic. Also, due to several post exile investigations I am generally prevented from giving any specific information regarding my whereabouts...

Did you always want to be a writer? If not what did you want to be?
Yes I always wanted to be a writer, but for the sake of adventure I imagined I would be a journalist for National Geographic (doesn’t everyone) or some other adventure/travel magazine. I took one journalism class in college and really hated it. 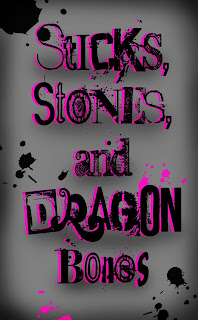 What is the name of your latest book, and if you had to summarise it in less than 20 words what would you say?
I just finished book two of my Sticks, Stones, and Dragon Bones series. In 20 words I’d say: pirates, monsters, sisters, soldiers, ancient castles, almost-Kings, violent guards, vicious fairies, one nice boy and one blind dragon.

What can we expect from you in the future?  ie More books of the same genre? Books of a different genre?
Right now stewing in my brain is a sci-fi, a post-epidemic set in the Northwest, two more fantasy books, and a historical fiction.

Currently I am getting Book Three of Sticks, Stones, and Dragon Bones edited, writing a companion book to my YA fantasy Ill-fated and doing some research for a post-epidemic.

Do you have a favorite character from your books? and why are they your favorite?
I love Bean from Sticks, Stones, and Dragon Bones. Bean is resourceful and intelligent. She has scientific nature and a bad habit of running headlong into dangerous situations. Despite her keen observation skills, she tends to choose the path of peril and adventure at every turn. She also happens to be a minor hypochondriac with an incurable case of scientific blathering.

Where do you get your book plot ideas from? What/Who is your inspiration?
For me, plot ideas develop from something very small: a magical device, an odd villain, a character’s back-story. A small idea can develop in many different ways, whereas a big idea is often stagnate. I tend to avoid big ideas and instead start small, begin with my character and setting and let the plot take care of itself. All though I will say, having an ending in mind seems to help things along.
Are character names and place names decided after there creation? or do you pick a character/place name and then invent them?
In real life villains are named Dennis, and dreadful, dismal towns are called Point Place, but in a world where you can create an immediate mental image with just a name, why be dull? I come up with my names after the invention of the place, in hopes that the name will capture the feel and mood of it (Within my YA fantasy Ill-fated a few of my favorites were: the Fiercehollows, the Iron Spine, and Deadroamer).
First names and surnames are just as important (Would Lord Voldemort be as terrifying if his name were Terry?). My characters always start out with the same name: MC (Main Character). Usually by the time I’m actually writing my MC has a real name, but during the brainstorming and plot building it is often just MC. Then one day the perfect name comes along and… pop it all fits into place.

Do you decide on character traits (ie shy, quiet, tomboy girl) before writing the whole book or as you go along?
With Sticks, Stones, and Dragon Bones the characters were defined by their interests rather than character traits, prior to writing. I never really sat down and thought “Bean will be hyper and Paige sarcastic.” Instead it was more like, “Bean will love science and animals and have a fear of heights and germs, and Paige will love books and writing and live down in a dismal library-dungeon.” Then as I wrote, Bean became more feisty and excitable and Paige sarcastic– bordering on pessimistic, as to bounce off one another.

Do you basic plot/plan for your book, before you actually begin writing it out? Or do you let the writing flow and see where it takes the story?
I would say a combination. Mostly I write down names and places, drawn maps, and doodle pictures of my characters. I do some outlining, though not extensively. Lately I’ve realized it’s important to keep my characters flexible enough to grow and develop as I write and my plot loose enough to avoid corralling my characters into unlikely choices/situations.
This brings us to a huge pet peeve of mine. Perhaps some of you readers have also experienced that moment when a character is nudged into a situation by the author. I call it “corralling.” The author needs character so-and-so at point B by Chapter Four… How does she do it? By having the character make an unusual, shall we say “uncharacteristic” choice or by using a series of unlikely events to essentially "chase" the character into position. For me as a reader, it is a terrible feeling to be jolted out of a story, to suddenly feel the ugly hand of the author, turning the character's head, legs, and marching him into position… Ugh!
I would say staying true to a character means abandoning your plot at times. If you have to choose between being a slave to your character or your plot, choose your character! I find if I listen to my character, the plot will take care of itself.