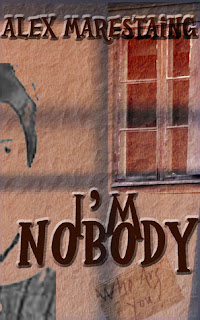 How long have you been writing?, and who or what inspired you to write?
I’ve been writing off and on for over a decade now.  My first paid writing job was for the Walt Disney Company.  Having that writing credit on my resume really opened doors for me later on.  Since then,  I’ve been able to write for media outlets like The Los Angeles Times, Lego, Thomas Nelson Publishers, and I even got to cover my favorite sport, soccer, in Europe and the U.S. It’s been a fun ride.

Did it take a long time to get your first book published?
I had a few books rejected before signing my first deal, but mine wasn’t the long struggle you hear a lot of author’s talk about.  Most of the hard work for me came after signing with a publisher.  Balancing the juggling act of writing and marketing at the same time is when the real struggle begins.

What is the name of your latest book, and if you had to summarise it in less than 20 words what would you say?
My latest book is called I’m Nobody.  It’s a YA/middle grade suspense novel about an agoraphobic teen who begins getting cryptic notes from long dead poet Emily Dickinson…or someone pretending to be her.  Caleb Reed, the protagonist, becomes obsessed with the notes, and they begin to lead him dangerously towards his worst fear, the abandoned mansion across the street.  It’s book full of suspense, with deeply emotional elements thrown in as well.

Do you have plans for a new book? Is this book part of a series?
I’m Nobody is part of my Lost Pages series - where writers from the past, like Emily Dickinson, C.S. Lewis, and J.R.R. Tolkien come back to life to help some wonderfully unique misfits.  If the first book does well, it would be fun to write book two.  Beyond that, I just started outlining for my next book, which will be my first non-YA/middle grade book.  I’m still in the brainstorming stage, which is my favorite part of a project, so I’m excited about that.

How long does it usually take you to write a book, from the original idea to finishing writing it?
From start to finish, it takes me several months to write a book.  The idea for I’m Nobody came to me in late 2011, and the novel didn’t get released until this year.  The length it takes me to finish a project makes it difficult because once I start writing, it’s hard to take on any other projects. My blog gets put on hold, and I can’t even take on any freelance jobs.

Do you have a certain routine you have for writing? ie You listen to music, sit in a certain chair?
I like listening to music when I write. It helps set the tone for the scene I’m working on. This weekend I began working on a chapter by chapter playlist for my latest novel.  I feel like my best scenes and blog posts have come when I’ve been inspired by a song I was listening to at the time. The genre? Well, that just depends on what I’m working on.

Do you read all the reviews of your book/books?
I really appreciate the time reviewers have taken to read and then write about my books, so I pretty much read all of them. Of course, I’m always curious to hear what they thought as well.
What was the toughest/best review you have ever had?
The best reviews are the ones where people have been genuinely moved by what they’ve read. When I read reviews like that, I feel like I’ve done my job as a writer.

Are there any hidden messages or morals contained in your books?
My first series, Izzy’s Pop Star Plan, was written for Thomas Nelson Publishers. They’re a faith based company, so that book contains some pretty strong spiritual messages.  I’m Nobody isn’t a religious book, but I’m sure that my faith in God comes to the surface at times.

Where can readers follow you?
You can read more about my projects at www.alexmarestaing.com, and, of course, pick up my books at Amazon.