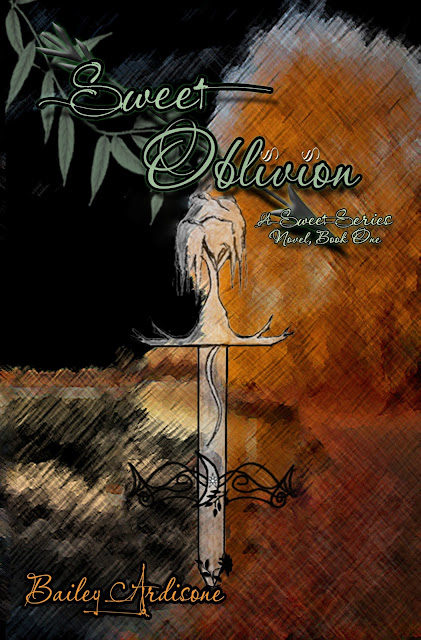 sweet adjective ˈswēt a : pleasing to the mind or feelings​obliv·i·on noun ə-ˈbli-vē-ən, ō-, ä- 1: the fact or condition of forgetting or having forgotten

Have you ever wanted to forget? Nariella Woodlinn has. Many times. Especially when her already frustrating life gets turned upside down by a mysterious boy who randomly shows up in her small town and she can’t seem to understand anything about him, despite how much she tries.​Nari hates everything about her life except for her best friend Rydan, but now that they’ve been separated during their senior year of high school, she has to learn to make new friends without him. When strange unexplainable phenomena start becoming an every day part of her life, Nari struggles to come to grips with reality. And with love.​Naminé has responsibilities. Duties. It is her obligation to fulfill all that is asked of her by their King. But when a glimmer of hope is introduced to her by a prisoner she tends to and it means life or death for her and her people, she does all that she can to turn that hope into reality and finally end the vicious war that has been ensuing since she was born. Even if that means keeping it secret from her King. Even if it means carrying out the biggest betrayal against the King ever seen during her time.​She has hope. She will fulfill her duty. She will not let her people down.Some secrets are best kept in Oblivion

“Please stop provoking Rydan. It’s not helping anything. I need him to like you, and all you’re doing is making things worse.” I tried to explain seriously but couldn’t stop the blush I felt creeping on my neck and cheeks.
“And why’s that exactly?” he asked seductively, leaning in closer. I stood there gazing up at him, mentally waving goodbye to any proper thought.
“Um, what?” I shook my head. “Why’s what exactly?” I asked again in a small voice, wanting to clarify my question. Was he asking why I thought he was making things worse…?
“Why do you need him to like me?” His voice was just above a whisper, making my skin tingle.
Oh. That.
He leaned in closer still, if that were possible, and now that he was just inches from me, my heart completely stopped beating. I could feel electricity running between us, begging me to close the tiny gap that had unforgivably been left open.
Posted by Jeanz xx at 03:00