A VAMPIRE FOR CHRISTMAS BY VARIOUS AUTHORS 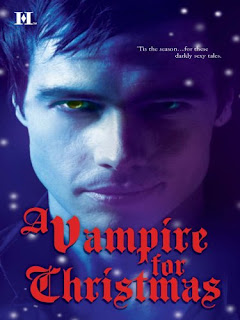 All they want for Christmas is you…

It's the time of year for twinkling lights on trees and kisses under the mistletoe. Yet the passing of another year means nothing to the stunning immortals who lurk in the shadows of the new-fallen snow.
And they don't care if you've been naughty or nice.
Let four fanged lovers open your eyes to a passion you never dared to imagine. After all, there's no place like home for the holidays—and these dazzling vampires can't wait for an invitation.
This book has four fanged Christmas tales in it and I have to say I really enjoyed all of them! The four novella's and authors are Enchanted by Laurie London, Monster's Don't Do Christmas by Michele Hauf, When Herald Angels Sing by Caridad Pineiro and All I Want For Christmas by Alexis Morgan.
Enchanted by Laurie London, is about Trace a vampire who is torn between duty to his heritage and family and his true happiness with the human woman that he loves. Trace also has to deal with the interference from his devious cousin Sebastian, who tries to use Charlotte to get at Trace. I loved this novella the well described likeable characters of Trace and Charlotte.
Monster's Don't Do Christmas by Michele Hauf , The main character and vampire in this novella is Daniel. Daniel had it all money, success and plenty of women too! then one night it all changed when he was bitten by a vampire! Daniel loses everything his job, his money and everyone he knows, he tries to keep away from "humans" and leave a sad quiet life as he thinks himself a monster who has no rights to a life. Until he meets Olivia, a famous singer who craves her privacy. Can they learn to live a quiet life together? Daniel is such a sad character since being made into a vampire he thinks he is a worthless monster. Olivia thinks herself a monster as she has to put on an act when she is being her public persona.
When Herald Angels Sing by Caridad Pineiro, This novella is a story of reincarnation, and living out the same sort of situation over and over until they behave in such a way that the Gods approve. If we had a chance to live certain parts of our lives any differently would we change the right things? Damien is the gorgeous Vampire in this novella and he has fallen deeply in love with Angelina who is in fact an Angel who has been sent by the Gods to show Damien the error of his ways. So will Damien learn the lessons the Gods want him to? and if he does can Damien and Angelina ever truly be together?
All I Want For Christmas by Alexis Morgan, In this novella Eaghan is the aged vampire who also happens to be a vampire. He is investigating young teenagers who are going missing and  others who are suspected of selling their blood to new untrained vampires. Della owns the small diner that just happens to be in the rough area of town that Eaghan is undercover in. Della is a good samaritan, in that she regularly gives cups of coffee and meals away in exchange for odd jobs done for her in the diner. There are also Shifters and Fae in this book although you may not totally realise who is who until nearer the end of the book when things come to an action led climax! I loved Della's kind hearted loving character and she really deserves happiness of some sort, but would she judge Eaghan for being a vampire or cop? Would a relationship even work between them as Eaghan can often be away on undercover operations for days at a time?
So are you feeling a little festive yet, and wanting a book with that festive feeling? Take a look at this anthology it's a brilliant compilation of novella's with the added extra bonus of them having a Christmassy feel to them. They all have Vampires in them that are gorgeous with those wonderous eyes that only vampires have and all the novella's feature romance too. * I would warn that some of the parts of the novella's are quite steamy and have sexual references so this book strictly for the adults*
Posted by Jeanz xx at 06:00