2.                  Did you always want to be a writer? If not what did you want to be?
When I was little, I wanted to be God, but I discovered that job was already taken. So I wanted to be a movie director, because I thought that would let me create worlds using all available mediums. I soon discovered, however, that directors have to deal with a lot of people, and a lot of people are idiots. So I decided to become a writer. Now I can play god with my characters. I like making them suffer and even killing them, but I’m a benevolent god. Everything always works out for the best in the end.

3.                  When did you first consider yourself as a "writer"?
I suppose it was after I performed a play I had written for a Theater class. The professor gave me the highest grade in the class and told me I should be a writer. It wasn’t the first time a teacher had encouraged me to write (another professor once read my essay to the class and said, “THAT’S the way you do it!”) but it was the first time I had been told that regarding a work of longer work of fiction.

4.                  Did it take a long time to get your first book published?
I’ve been trying to get traditionally published for nine years, but I decided this year that I’d rather go indie. Goddesses don’t need agents and editors telling them what to do.

5.                  Do you work another job as well as your writing work?
Not anymore, although technically even when I did have another job, I was a writer. I’ve worked as a journalist for over thirteen years. I’ve been an editorial cartoonist, a comics magazine editor, an arts-and-entertainment writer, and a consumer columnist.

6.                  What is the name of your latest book, and if you had to summarize it in less than 20 words what would you say?
Toren the Teller’s Tale is about the magic of stories and one seventeen-year-old storyteller’s struggle to accept that magic within herself.

8.                  How long does it usually take you to write a book, from the original idea to finishing writing it?
I started writing Toren in my head thirty years ago, when I was the same age she is in the book. I turned it into a written manuscript in 2002, and I finished editing the book last month. However, I have two novels that I wrote in under a month. Once I start writing a story down, it usually takes me about a year until I’ve finished editing it.

9.                  Do you have plans for a new book? Is this book part of a series?
This book is meant to be first in a trilogy. However, because of its complex nature with its stories-within-a-story structure, the second book in the trilogy probably won’t be out for a few years. In the meanwhile, though, I intend to publish my five other novels, including Ride of Your Life, which was a SmartWriter’s Write It Now third-place winner in the YA category as judged by Alex Flinn, the author of Beastly; and Why My Love Life Sucks: The Legend of Gilbert the Fixer, which was an Amazon Breakthrough Novel Award quarterfinalist. The first is a romantic ghost story inspired by the Great Adventure Haunted House fire that killed eight people in 1984. The second is a humorous science fantasy about the ultimate geek’s ultimate nightmare: being stuck with a gorgeous girl who just wants to be his platonic best friend forever.

10.              What genre would you place your books into?
Toren is a literary fantasy, or a work of metafiction. It’s a YA or upper MG similar to Cornelia Funke’s Inkheart. Most of my books are for children or young adults, but I write in a variety of genres: humorous fiction, fantasy and science fiction. I even have a memoir for adults about four generations of women in my family in Jerusalem.

12.              Do you have anybody read your books and give you reviews before you officially release them?
I used to moderate a critique group, the Fantasyweavers, and it was a great group. I gave it up, though, when I started to feel that their critiques and those of editors and agents I’d met at conferences contradicted each other. When one reader says it needs to be funnier and another says it has to be more serious, you can’t rely on critiques to give your writing direction. You just need to believe in your own ability to know what’s best for your story.

13.              What do you do to unwind and relax?
Write. There’s nothing I’d rather do more. If I can’t physically write a story down, I’ll write it in my head. I’ve been doing that since I was a kid. Writers are never bored and never alone. I can’t think of a better way to relax than to tell myself stories.

14.              Is there a certain author who influenced you in your writing?
Not really. I’ve read and loved so many books, so I can’t say that one writer particularly influenced me over any other. I guess if I had to pick one, it would be Ray Bradbury because of his infectious love of books.

15.              Do you think ebooks will ever totally replace printed books?
No. I think there will always be readers who prefer to hold a physical book in their hands. I know I still buy many books on paper even though I have a Kindle. There are just some formats that don’t work at all well on an e-reader, like graphic novels and art or photography books.

Any other information you wish to supply?

My blog is full of writing tips and inspiration. Check it out, leave a comment, and subscribe. You can also email me at shevi.arnold@hotmail.com. I love hearing from readers! 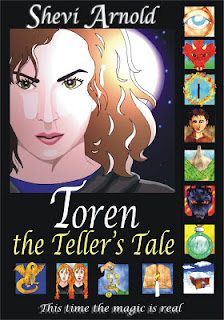