PROMOTIONAL SPOTLIGHT - 'TIL DEATH DO US PART BY DIANNA HARDY 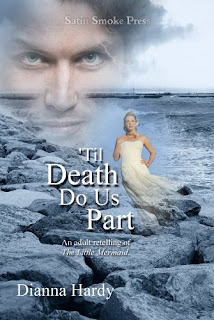 BLURB from Goodreads
"The day you get married, is supposed to be the happiest day of your life. Dreams are made of such things. But I forgot. I could blame the witch if I wanted to – in fact I did, for quite a while after – but the fault can only lie with me. Being with him made me so happy – so very, very happy – that I chose to forget. I chose amnesia. If I had had any foresight into how my flippant choice would ruin him, I would have saved him the heartbreak. I would have forfeited my knowing him, my own selfishness, lived forever in the pain of unfulfillment, if it meant he could be spared...."When you love someone so much that your heart aches without them in your life, would you give up everything you've ever known to be with them? Would you give up your identity?This is exactly what Aria did. But her sacrifice comes at a great cost, with startling consequences. With no memory of her previous life, she's forgotten what she really is, and who she's left behind: a jealous, possessive God, who's finally found her, and will stop at nothing to keep her heart from ever straying again.In this dark and erotically passionate retelling of The Little Mermaid, can a love founded on humanity, stand the passing of time, an angry sea-God, and even death itself?