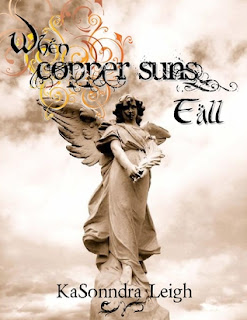 An Excerpt from When Copper Suns Fall: a YA Dark Urban Fantasy
By KaSonndra Leigh

Forcing my eyes to open, I found myself outside the Cradlehack. I was standing in Faris’s arms, my head against his chest, my fingers entwined in his black vest. It was a smooth fabric that felt like silk. A cloth no one had worn outside of ceremonies since before the Tidal Years. This boy was no common citizen. His earthy-sweet smell made me feel hypnotically safe, as we stood among the crowd fleeing down the hillside. He lifted my chin, stared in my eyes. But this wasn’t some dumb player’s move.
No, a mysterious thing stirred behind his silvery-gray eyes.
“Feel better, Chela?” he asked. I nodded.
“Thanks for helping me,” I said, still fighting a light head. Still afraid the dreaded black blobs lingered somewhere around us. Somewhat ashamed I’d spoken so horribly to him moments ago.
“You probably shouldn’t do that,” he said.
“Do what?”
“Thank me.”
“Why? Because I caught you using alchemy? That’s what your kind does. Make magic in the shadows, right?” I said.
His left eye ticked. The girl in the hoodie had called him a Caducean. Could it be possible? Father told me Caduceans were a mythical group—demon slayers from a time long gone. Yet, here I stood with a boy who didn’t deny my claim.
Around us, fewer people were leaving the Shack. They paid no attention to the two idiots standing and staring at each other. Did Jalen and Lexa make it out safely?  They were taking forever to reach me.
Did I really want them to find me?
“They’ll call me, now, and make me a witness against you. I’m sorry, but I already have too many problems. So I—I have to tell the truth,” I said.
“That won’t be a problem.” Faris smiled, a catchy one that lit his face up. I couldn’t decide whether it was angelic or downright wicked. Just like I couldn’t remember where I’d ever heard an accent like his. What kind was it? Old southern? Old English? Irish? It sounded like a mix of all three, but with a deep timbre, making him sound god like. “In a few minutes, you won’t remember me or any of this.”
“Really? How do you figure that?” I asked, heart racing.
“Because my gift to you…” He moved his face closer to mine, pulling me into whatever was happening in his head. “My gift is to remove memories that cause you pain.”
“Okay, um, right.” Had I lost my mind? It probably wouldn’t have hurt to scream.
He held my gaze, locking me into something I couldn’t explain. A tear puckered up in his left eye, and slid down his cheek where it stopped on his top lip. Then he blinked, snapping us out of whatever place he’d taken us to, and glanced behind my head. “Here comes your dark knight,” he said, easing his arms away from me.
He strolled off into the last group of stragglers hanging around the Shack. How did he know my nickname for Jalen?
I wiped away a tear rolling down my right cheek.
“Chela, there you are. You scared me, girl.” Jalen’s voice cut into the moment. He spun me around to face him. I blinked, clearing my eyes. “What’s wrong? Did you get hurt?”
I glanced around us. The boy was gone. A dull headache joined the fuzziness in my head. Lost inside a clouded mind, I forgot what I wanted to say. The entire night’s events were hazy.
I fumbled with my thoughts.
What happened to me in there?