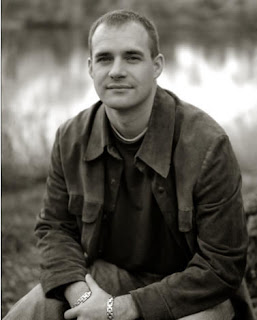 Hi, Jeanz.  I just wanted to quickly say thanks for having me-I appreciate you taking the time to do an interview with me.  Ok, on to the questions!

What is your name, where were you born and where do you live now?
Dean Murray, I was born in Idaho, and currently live in Logan Utah.

When did you first consider yourself as a "writer"?
That’s a bit of a tough question because it happened so gradually.  I think the first e-mail I got from someone who read my fan fiction novel and loved it was probably where I realized I’d just become a writer.  You kind of expect your friends and family to go easy on you and tell you that you book was really good despite it having taken them 12 months to get around to reading it, but when a perfect stranger goes out of their way to tell you they enjoyed something you wrote, it’s a huge compliment.

I think the other big step forward as far as me viewing myself as a ‘real’ writer was when strangers started paying actual money to read my stories.  That’s some heady stuff there J.

What is the name of your latest book, and if you had to summarise it in less than 20 words what would you say?
My most recent book to go live on the various retail sites was Torn.  “Shapeshifter boy is torn between protecting his pack and a growing fascination for the new girl in school.”

Who is your publisher? or do you self publish?
While I might consider a ‘traditional’ publishing deal at some point in the future, I’m currently self-publishing.  Given all of the metaphorical dust currently in the air as a result of this disruptive technology of e-books, it seems prudent to wait for things to settle down a bit.  Plus, I really love all of the control indie publishing provides.

How long does it usually take you to write a book, from the original idea to finishing writing it?
You’ve got a knack for asking leading questions J  The amount of time it takes to write a book can really vary for me, at the same time it’s a very known quantity all at once.  Over the last several books I’ve clocked myself and I write at a rate of between 500 and 1000 words per hour.  My average book has run somewhere in the range of 80,000 words, so I always know when I sit down to write a book that I’m looking at dedicating between 80 and 160 hours of my life to getting it to the rough draft stage.  That’s the predictable part.

The tricky part comes in just how many weeks or months pass between when I have the idea and when I actually finish the book.  I find when I’m doing a lot of writing, that ideas just kind of rain down from the heavens, but there is usually quite a backlog of other ideas already in the queue, so it’s a bit difficult to measure the time between when I get the idea and when I sit down to write it.

Excluding the simmering time, and the outlining bit, the rest of the process comes down to just how much free time I have during the time when I’m trying to write.  When I wrote Broken (the alternate perspective to Torn) I was working a fairly demanding job at the same time.  Broken took me roughly six months to write because I was sneaking in an hour at lunch and an hour or so during the evening.  Torn on the other hand was written when I was between jobs, so during that time I treated writing as my job.  I usually wrote between 4,000 and 6,000 words a day while I was working on Torn, and it took me something like a month, month and a half to finish it off.

Which of your books were easier/harder to write than the others?
I don’t know that I’m far enough into writing full novels to really have a great idea around what makes some easier than others, but I’m starting to get some glimmers.  Those books where I have lots of time to dedicate to writing seem to go smoother than the ones that I spread out over six or more months.  I think that’s a function of my subconscious being more fully engaged with just writing rather than splitting its focus between writing and other things.  Torn went by smoothly, so did The Greater Darkness and Frozen Prospects.  Thawed Fortunes was a little less so towards the end when I was working some really long hours at my day job.

The other thing I think that really helps me is the quality of the outline I get to before I start actually writing.  It doesn’t have to have every last bit mapped out, but if there is a part of the outline that I’m really struggling with, then generally I’m going to struggle with that same piece of the actual book.

What can we expect from you in the future?  ie More books of the same genre? Books of a different genre?
I can feel already that I’m going to range a bit farther afield maybe than you intended for this question J.  The short answer is more books of the same genre, and more of different genres.  There’s a long answer though which I think is worth going over.  As things currently stand I’ve written full novels that are epic fantasy, urban fantasy and paranormal romance, but I really think there’s more similarities to those genres than we sometimes realize.  I think nearly all romance books have an element of fantasy to them-if you don’t include a bit of fantasy, then they end up too similar to the drudgery of everyday life that we all experience at some point or another.  It could be that the love interest is independently wealthy, it could be that they are a vampire, but it’s still fantasy designed to add a bit of spice to the story.

Likewise, I think most of the best fantasy has romantic elements to it.  As human beings, we are incredibly impacted by our relationships, and most books that have a scope that covers weeks and months, need to include some degree of romance in them or they risk coming across as flat and unrealistic.

I fully plan on continuing with all of the series I’ve started so far, but I’d also like to explore some other settings.  That will likely mean that I cross over and blur some genre lines, but I think readers are ok following a writer on that kind of journey as long as the writer continues to touch them with the same kind of themes and characters.

Do you have plans for a new book? Is this book part of a series?
Torn is definitely part of a series.  Currently from the same series there are two other books nearly ready to go live, one (Broken) telling the same story from a different point of view, and another that picks up where Torn and Broken leave off.

Long term I’d like to tell a much larger story arc by developing the stories of other currently minor characters as I continue to tell the story of the major characters that readers have fallen in love with.

All by itself I think that is pretty exciting, but I also plan on writing a parallel series in the same world, with the same characters, but with an alternate timeline.  It’s going to give me an incredibly broad canvas with which to develop my characters, and I honestly get giddy at the thought.

Thankyou for taking the time to take part in this Interview Dean. I will be reading Torn so watch out for my review!
Posted by Jeanz xx at 10:00