ONE LITTLE SPECK BY GAYNOR GOODCHILD 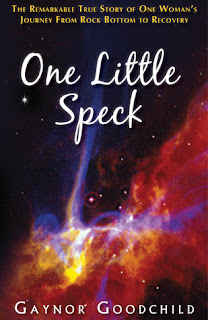 As a child, Gaynor had many roles to play - parent to her baby brother, rescuer to her beaten mother and most of all, keeper of the family secrets. She witnessed and experienced things and age 13 she took her first sip of whiskey and thought she'd found sanctuary. She grew up fast and was soon bunking school and spending all her time in pubs, being bought drinks by unsavioury men. Gaynor's story illustrates how easy it is to find yourself out of control. Small slippery steps got her into horrific situations involving, abusive men, drink and drug addiction, prostitution, self harm and serious mental illness, which stripped her of the ability to love herself or even her daughter. Having endured more than humanly possible and being a victim of her own destructive behaviour for so long, Gaynor finally managed to take steps to overcome her demons for good. One Little Speck is the remarkable story of her journey from hopeless rock bottom to recovery. Gaynor is now a qualified counsellor and hopes to help others in the future to overcome their addictions. She lives in Essex with her partner and is a proud mum to her law-graduate daughter.

This book is a truly in depth, honest account of Gaynor's life, her addiction to alcohol, then drugs and perhaps the addiction that caused her the most pain and upset in her life her addiction to men. Gaynor seems to attract the wrong sort of men who feed her addiciton rather than help her rid herself of the addictions she has. She started out as a young child seeing her parents consume large amounts of alcohol and the violence that ensued between them afterwards, so it became "acceptable" or "normal"  behaviour. So that when Gaynor had her own relationships she seemed to accept the violence towards her. Gaynor tries many times to leave her addictions behind her but time and time again she keeps being dragged back into the drinking, even her own family offer her drinks etc when she is attending Alcoholics Annonymous. Gaynor has her own daughter whom she brings up alone. The love that shines out from the book is the love Gaynor always has for her daughter. Gaynor and her daughter move around a lot trying to escape the people that drag her back into drink and drugs and abusive relationships. Gaynor often wonders if her life style will affect her daughter,but, as you read the book you will see that both Gaynor and her daughter are successful women with good careers now.
I think it was extremely brave of Gaynor to tell her story with nothing held back. As someone who has seen and lived  life with Domestic Violence it is a difficult subject to talk about alone, yet Gaynor manages to speak about that as well as her added addictions of alcohol and drugs.
Posted by Jeanz xx at 12:07