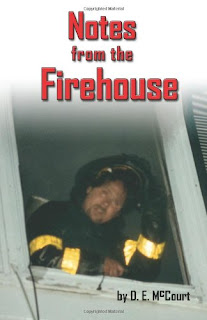 ·         Did you always want to be a writer?  If not what did you want to be? Love literature, but never     thought I’d write a book. So many things that I’d love to do, but life forces us to make a choice. I’ve owned and operated a trucking company that specialized in pianos and worked as a professional firefighter for the Melrose Fire Department.

·         When did you first consider yourself as a "writer"?  I never considered myself a writer, just a    proletariat that was willing to struggle through the process.

·         Did it take a long time to get your first book published?  Self-published but it took me ten years to write it.
.
·         Do you work another job as well as your writing work? The book was written in my free time. Sometimes late at night or while sequestered at the cottage in Maine. I actually dictated many of the stories to a recorder while traveling back and forth to Maine – IT’S A SIX HOUR DRIVE.  The drive provided an uninterrupted atmosphere that allowed me to mentally put myself back in some of those moments that were so emotional. You need to feel those emotions to try and find the right words to describe them.

·         What is the name of your latest book, and if you had to summarize it in less than 20 words what would you say?  “Notes from the Firehouse”- it’s a memoir that gives the reader a peek into the heart and mind of a firefighter.

·         Who is your publisher?  Or do you self publish? Self-published with Createspace and they were very easy to deal with.

·         How long does it usually take you to write a book, from the original idea to finishing writing it? Over ten years for this neophyte author.

·         What can we expect from you in the future?   i.e. More books of the same genre?  Books of a different genre? If I were to ever write another one (God help me) it would be another non-fiction book.

·         What genre would you place your books into? It’s a memoir which consists of seventeen short stories.
·         Where do you get your book plot ideas from?   The many facets of firefighting: fires, rescues, politics, and that special brand of insanity that’s found in the firehouse – we called it the cracker factory. Some of the stories are about the calls that took a little piece out of you. Others are of a more ridiculous nature, such as: trying to capture a runaway parrot, evicting a vagrant bat, freeing a small white dog from the jaws of a snow blower and fighting a brush fire while being bombarded with golf balls.

·         Do you have anybody read your books and give you reviews before you officially release them? Yes, there were a few prolific readers that had trusted opinions. I actually had them rate each story; it was painful at times, but their input was invaluable.

·         Do you gift books to readers to do reviews? I gave a book to all the people that I’ve shared books with over the years, if someone said that they loved the book I would tell them that their testimonial would make a great review.

·         Do you read all the reviews of your book/books?  Absolutely, it’s so rewarding to have a reader provide positive feedback on something that you can remember writing and rewriting trying to produce that effect.

·         What was the toughest/best review you have ever had? I haven’t had many really tough reviews yet, but the best reviews are the ones that say the stories made them feel something – whatever the emotion.

·         How do you come up with the Title and Cover Designs for your book/books?  Who designed the Cover of your books?  The cover came from a photograph that was taken by Chickie McCarthy who was a captain on the Melrose Fire Department and was a photographer as well. After learning that Chickie had cancer I made a final push to finish the book. Chickie received the first copy. He read it while receiving his chemo treatments. Chickie would succumb to the cancer a few months later. I was so glad he got to see his photo on a book cover before he died – he loved the fire department.

·         How do you market/promote your books?  I’ve had a few newspapers run stories about the local firefighter that wrote a book and firefighters have spread the word, but trying to reach a broader audience is a challenge.

·         What do you think makes a book a really good/bestseller?  Unfortunately marketing is the main force behind a lot of books that really don’t deserve the attention. In my opinion, you lose track of time with a good book and you think about it even after you’ve put it down. If readers have that response to a book then it should be a best seller and it’s a good book.

·         Have you ever suffered from a "writer's block"?  What did you do to get past the "block"?  Everyone does, it’s mental fatigue or a distraction in your life.
·         What do you do to unwind and relax?   Canoeing on a river that hasn’t changed much in a hundred years, no sign of civilization to be seen; it feels like I’m in the Master’s workshop.
·         Are there any hidden messages or morals contained in your books?  (Morals as in like Aesops Fables type of "The moral of this story is.") Not so much a message, more like a purpose. My goal was to give a complete picture of a working firefighter and each story served a purpose to achieve that end.

·         Is there a certain Author that influenced you in writing?  The title of the book came from one of my favorite authors – Dostoyevsky and one of his books, Notes from the Underground. A non-fiction book that influenced my own was Ernie Pyle’s Brave Men. He gave such a complete picture of a soldier’s life in WW 2. My goal was to give a complete and accurate picture of the life of a firefighter, sometimes humorous and sometimes heartbreaking.

·         Which format of book do you prefer, ebook, hardback, or paperback?  I haven’t made the jump to e-books yet, but something tells me that it’s inevitable.

·         What is your favourite book and Why?  Have you read it more than once?  I’ve read many books more than once, from Elmore Leonard to James Joyce. The short stories of Dylan Thomas in “Portrait of the Artist as a Young Dog” I’ve read numerous times – what an amazing writer. His two poems October and Fern Hill left a high water mark that few poets could ever dream of reaching.

·         Do you think books transfer to movies well?  Which is your favourite/worst book to movie transfer?  My favorite book to movie would be Elmore Leonard’s Rum Punch into the movie Jackie Brown. Quentin Trantino really captured Leonard’s gritty, but cool style. One of the worst transfers in my opinion was Angela’s Ashes - the movie didn’t come close to the book.

·         What are you currently reading?  Are you enjoying it?  What format is it?  (ebook, hardback or paperback) Currently it’s “In the Garden of Beasts” by Erik Larson. He’s always good; my favorite book by Larson is “Devil in the White City.”

·         Do you think ebooks will ever totally replace printed books?  Not completely but e-books will grow in popularity and print books will diminish in numbers until some sort of balance satisfies the market forces.

·         Do you think children at schools these days are encouraged enough to read?  and/or do Imaginative writing?  Absolutely not and the PC police restrict and water down what is read.

·         Is there a book you know you will never read?  Or one you tried to read but just couldn't finish?  Ernest Hemingway’s “A farewell to Arms.” I’m not sure what happened, maybe it was me, but I just couldn’t finish it.  There are many books that I will never read.

·         Is there anything in your book/books you would change now if you could and what would it be?  There is always something in the book that I would change whether it is a paragraph or a single word. Flannery O’Connor was such a great writer but they say it took her forever to finish her work. Writing is rewriting to a degree. When I was near the end of my book I was walking around thinking of single sentences and whether I had used the best adjective or whatever. I was driving myself crazy.

·         What do you think about book trailers? Never paid much attention to them.

·         What piece of advice would you give to a new writer? Don’t be in a rush to finish your book. Writing is rewriting and more rewriting. After it’s finished you’ll be happy that you went the extra mile and you’ll regret it if you don’t. Let whatever you’ve written sit for a while and then read it again.

Thankyou Doug, for taking the time to take part in this Interview!
Posted by Jeanz xx at 03:00