FALL OF EDEN BY MICHELE POAGUE 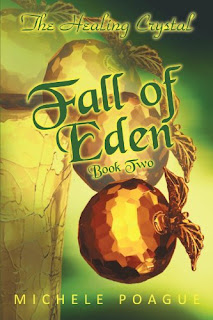 Myths are but shadows of a greater truth.
What is the Healing Crystal and who is the rightful heir? Is it a religious object or a powerful weapon? Does it belong to a fallen line of kings or to the colonists of Survin? Should its fate be left in the hands of the young and inexperienced Kairma or to Narvin, the last descendent of a line of kings? Kairma holds the Crystal and believes she will become the next leader of Survin, while her younger sister Kinter, believes she, not Kairma, is the rightful heir. Narvin believes the Healing Crystal is the Star of Genesis, a powerful relic his ancestors have been seeking for centuries. Determined to possess the object that will return him to his glory, Narvin is unwavering in his quest to possess it, and Kairma is caught in a fierce race across barren deserts and rugged mountains to a shattering finish where the winner must decide the fate of the world.
Well after reading book 1 Heir To Power I had to read book 2 straightaway I really wanted to know what would happen to all my favourite characters.
In this book Narvin has decided to go after the Healing Crystal, or as he call's it The Star Of Genesis and steal it for himself, and he doesn't care who gets hurt in the process. everyone is expendable to him, he is a really selfish horrible man! Artuk his "deputy" come "man servant" is not as dogged down as he first made out, in fact I think he is as devious as Narvin is. Varden is a cruel killer hired by Narvin, I won't give away major spoilers but lets just say that Varden gets what he deserves.
We delve further into the characters lives and their individual mind sets. Kairma has to lead and keep the Crystal safe. Kairma still has two possible suitors, Naturi who has been brought up believing he will be Comad, who perhaps does not know Kairma as well as he first thought he did. Naturi also questions everything Karima says and does. Whereas Collin deeply, truly loves Kairma and will follow her to the ends of the earth and do her bidding without question or thought for his own safety.
We lose some loved characters in this book, read it to find out who! and the rest of the group have to come to terms with their grief together.
We also see what is happening in Survine too, the many men, women and children killed when Survine was taken by Narvin and his men. We learn a little more about the madic, the white ones as well as more about the survinees.
Kairma also discovers new knowledge about the Crystal as well as the true history of her people. Kairma has many difficult choices to make during this book. Sacrifices have to be made in order to survive at all.
I again loved the pace of the book, the way it kept me reading answering my questions as we went along, and making me think of even more possibilities and questions, so much so, I will definitely be putting bk3 on my to be read list.
Again I loved the cover, with the picture of the Crystal on it. I love the imagery, the brilliant descriptions, you feel the frustration Kairma has with her sister Kinter. You read about and literally see the jealousy that Kinter has around Kairma. Kinter believes that she should be the next Miral not Kairma.
I would say if you buy bk1 treat yourself to bk2 aswell as I am sure you will wish to read it straightaway. The only disappointment I have is that bk3 isn't out yet! A MUST BUY