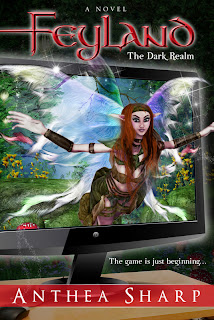 Thanks, Sandra, for having me on the blog today! I’m excited to meet new readers and have the chance to tell people about my brand-new book.

What is your name, where were you born and where do you live now?
Anthea Sharp, I live in the Pacific NW of the US – think lots of rain~

Did you always want to be a writer? If not what did you want to be?
Yes! I wrote stories as a kid, and started writing a few novels as a teen, but never could get past the beginning, so I put that dream away and did other things for a while, including playing traditional Irish fiddle music – though I maybe have two drops of Irish blood in me.

When did you first consider yourself as a "writer"?
In high school and college I wrote a lot of poetry, and won some awards for it – so I considered myself a writer then, but not a fiction writer.

Did it take a long time to get your first book published?
Feyland is my first solo book, but I’ve preciously collaborated with my husband on other novels. Our first book went through a couple years of revisions, then a year to find an agent, then a year to sell to a publishing house, then a year after that until it was finally out in print – so about 6 years of effort. By contrast, Feyland has only taken a little over a year. I love that about independent publishing!

Do you work another job as well as your writing work?
My other job is a musician – I play fiddle and sing in a Celtic band, and I teach private lessons. I get to be very creative in my work, and I’m happy about that.

And now, a bit about the book. Feyland: The Dark Realm is my debut Young Adult Urban Fantasy. (Whew, that description is longer than the title!)

Feyland is the most immersive computer game ever designed, and fifteen-year-old Jennet Carter is the first to play the prototype. But she doesn't suspect the virtual world is close enough to touch -- or that she'll be battling for her life against the Dark Queen of the faeries.

Tam Linn is the perfect hero -- in-game. Too bad the rest of his life is seriously flawed. The last thing he needs is rich-girl Jennet prying into his secrets, insisting he's the only one who can help her.

Together, Jennet and Tam enter the Dark Realm of Feyland, only to discover that the entire human world is in danger. Pushed to the limit of their abilities, they must defeat the Dark Queen... before it's too late.

How did I think of the concept?
Since I’m a computer gamer as well as a longtime reader of fantasy, the two worlds began to mix around in my head. What if… there was a game that was actually a portal to the Realm of Faerie? How would technology and magic collide, or work together? Once I had that part imagined, I knew I needed a couple bold adventurers. Jennet and Tam are inspired by the ancient Ballad of Tam Lin, which was first collected in written form in 1549, in Scotland.

I’m very excited to be launching this first book in the series – and to help celebrate, the digital version of Feyland: The Dark Realm is on special sale for just .99 cents (USD) through December 17th only! On December 18, the book will revert to its normal e-book price of $3.99.

Buy a copy at Amazon US, Amazon UK, Smashwords, or Barnes & Noble.