REVIEW - MANNING UP BY BEE WALSH 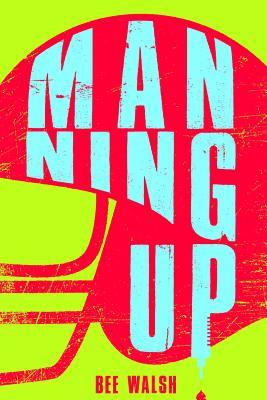 BLURB from Goodreads
Jack is at the top of his game. He's a senior running back on the football team, dominating every opponent in his way. To everyone else, Jack is totally in control. In reality, he struggles with an eating disorder that controls every aspect of his daily life. When Jack starts using steroids, he feels invincible, but will the steroids help him win the big game, or will he lose everything he's ever worked for?

REVIEW
I was attracted to reading this book as it is a Hi Lo book which roughly means, when I googled it to explain it correctly, I found the following explanations “A hi-lo book, broadly defined, is a title that offers highly interesting subject matter at a low reading level. A number of publishers have focused on producing these books, though they often take slightly different approaches to creating the products that best fit a particular market.” Also, another description I have come across is, ““Books where stuff happens…but easy to read. Not a book for kids.” This is a common readers’ advisory question for reluctant or struggling teen readers (and their adults). Such readers often feel keenly the gap between the books they are able to read, and the topics they *want* to read. Must they read from the children’s section, with its juvenile topics and the same titles they would have picked in grade school? Not at all. This is a gap that hi/lo books aim to fill.”

I really like the cover of this book and in fact, generally like the covers of Hi Lo books as the ones I have come across are bright, colourful and certainly draw your eyes and attention to them. The genres listed for this book are Children’s fiction, Teens and YA and it does fit those genres but as an adult I still enjoyed reading this book, I would say personally I think the book is aimed at the teenaged end of children’s fiction rather than under 12’s though.

The books main character is Jack a high school soccer player who is already really good though he does watch what he eats fairly carefully. Where his team mates go for milkshakes and burgers after school, Jack will go along but by moving table to table, talking to different team mates he manages to get away with not eating anything and no one noticing he isn’t eating too. The soccer coach is constantly pressuring the team to play better, train harder to get to the championships. Though he is already a great soccer player when he see’s other team members receiving medication to help them bulk up more than he is already naturally with his gym sessions. Jack soon discovers the side affects of taking medication is a real problem.
Jack lives with his mum and sister Beth as his dad died years before. Jack sort of considers himself as the man of the house and takes a lot of responsibility on his shoulders. He tries his hardest to be strong and doesn’t share his emotions and feelings very well. Jack worries about hi sister Beth being bullied at school, and worries when he hears his mother sat crying at the kitchen table surrounded by bills. He really takes on the whole family’s problems and issues. When his friends at school are counting the days to the end of school, thinking about who to ask to the homecoming dance and talking about going away to college and what they want from the years ahead, Jack cannot seem to get excited for leaving school and cannot see what his future will be.

I won’t go any further into the details of the book but I have to say I felt really pulled into the book. Even though it is a fairly short book it is a very quick read. I really didn’t want to put it down and became quickly attached to the character of Jack. The story and plot come across really realistic and I think this book would be a great one to be read in schools to prompt conversations.

I have to say I adored the characters in this book. The book illustrates perfectly that body dysmorphia and eating disorders are not exclusive to females. This book tells the story of a fantastic football player called Jack who doesn't believe he is good enough.

I have to say I adored the characters in this book. The book illustrates perfectly