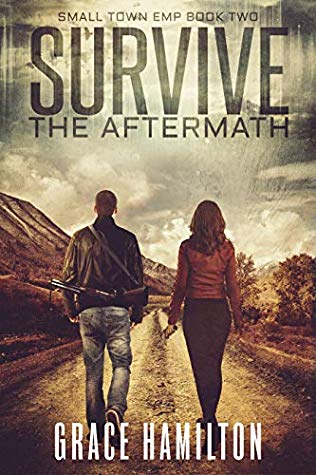 BLURB from Goodreads
The New World Order is at hand. Civilization has crumbled since the EMP thrust humanity back into the Stone Age, and dangerous factions now scavenge for scarce resources in this terrifying new world. Austin Merryman wonders what the future holds for his teenaged daughter, and if the madness surrounding them is even worth surviving. For now, the group is safe in his brother’s prepper house nestled in the Rockies. But the calm can’t last forever. With sixteen people crammed together in the tiny mountain home, tensions are bound to erupt. It doesn’t help that his brother’s lazy friend gets twisted pleasure from stirring up animosity, pitting brother against brother and daughter against father as battle lines are drawn. But decisions about who stays and who goes are ripped from their hands as information on the USB drive lays bare pieces of the NWO’s plans. Austin realizes the horrifying truth of why he’s in their sights, as well as the danger he’s brought down on those he loves most. When tragedy again strikes the small group, it will be up to Austin to make the hard choices necessary to ensure their survival. Until a dying man utters the single word that changes everything…

REVIEW
As I loved Survive The Chaos, which was book one in this Small Town EMP series I was keeping an eye out for more of the series. The cover of this book fits well with that of the first book, which means that the series have a cohesive look. The genre is post-apocalyptic, which I have to admit is one of my favourite genres to read. There is a “trigger warning” about substance abuse, it is actually alcohol abuse and is only a small part of the book.


The book basically picks up where book one left off. There are some awkward questions and decisions that need to be made, some will be not be popular with the rest of the group but it becomes apparent that someone needs to take the lead and ask these questions. For the time being all sixteen people are safe at Ennis Merryman’s prepper ready house. However, with so many people staying in close proximity, including the revivalist party who originally only wanted to stay temporarily and then continue their journey to Salt Lake, their own home base. The house is seriously overcrowded which means people are starting to irritate each other as well as the food provisions are being reduced at a more rapid rate than they were ever meant to be. Broaching the subject is going to be difficult as though the house and supplies belong to Ennis it is his brother Austin that everyone seems to look at as a leader of the group. Within the revivalists, Tonya seems to be in charge though they are all looking to Malachi to lead the prayers etc stepping into his father shoes as he would have eventually been trained to do.

I have really become attached to some of the characters in this series so far. Savannah is still set on the possibilities of a relationship with Malachi and does things she comes to regret in an attempt to get his attention.

Nash is still one of my favourite characters and is staying at the house and still helping a lot around the place though sadly he seems to become more and more side lined by certain people in the house. Of course, my favourite couple in the book is Austin and Amanda, I hope they survive the series and end up together! A little romantic hope in a post-apocalyptic setting!

A character I thoroughly enjoyed disliking in the last book and became even more so in this book was Wendell. He doesn’t want to take part in any manual tasks and will only do “inventory” of the supplies they have. As time goes on it becomes apparent why he enjoys doing inventory when it is discovered he has been helping himself to large portions of the alcohol. It’s not just that he isn’t very practical, or a bit lazy, he goes out of his way to cause problems in this book, pitting brother against brother at every opportunity. Then when there’s a case of everyone making a stand, he goes away to hide with a bottle of alcohol.

There is the constant threat of the New Order searching for Austin and his family. They desperately want to retrieve the USB, and Austin is as desperate to find out what is on it! With help from Nash they try to decode it, and at one point, Austin has to go in search of a woman his friend Callum said would know what to do with the information.

Some of the revivalists, such as Tonya and Bonnie are still grieving for the loss of their husbands but all make a conscious decision to help out and create a life at Ennis’s house. Despite their religious beliefs they take part in self-defence, and weapons training. They all need to be prepared to fight to protect each other and what they have in the way of food etc.
There is much more to be revealed about the mine where Nash was when the power went out, as well as more to be learnt about the New Order. Sadly, it seems there are small bands of survivors who are often aggressive to outsiders. It seems the New Order are giving out propaganda encouraging survivors to distrust each other.

My immediate thoughts upon finishing the book were, Seriously, looking forward to more of this series! Lost some brilliant characters in this part of the series! Will those remaining survive? What is on the USB drive? Will the group ever find somewhere safe to settle? Will *?*?* and the New Order catch up to them?

So, to sum up I looooove this book, its characters and I am seriously looking forward to read more! Grace Hamilton is firmly on my favourite authors list!