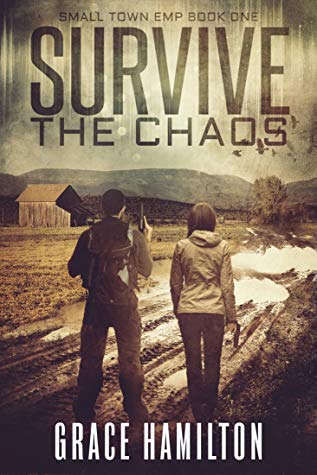 BLURB from Goodreads
When the lights go out, anarchy reigns supreme. After Austin Merryman’s wife died, he and his fourteen-year-old daughter left home to travel the country in an old RV. But the comfort and renewal they sought soon descends into chaos—even before the EMP hits. When a message from an old college buddy leads Austin to a bridge in the middle of nowhere, he finds his friend—now an NSA agent—waiting to give him a USB drive. Before the contents can be explained, machine gun fire strafes the bridge, killing Austin’s friend and forcing Austin into the raging river. Rescued downstream by a beautiful veterinarian, Austin learns that EMP attacks have thrust the world into eternal darkness—and separated him from the only person he has left: his young, but resourceful, daughter. Now, he’ll move heaven and earth to locate her and make it to his brother’s prepper hideaway in Utah. But the post-apocalyptic world is no longer a friendly place. Resources are growing scarce. Factions break out and walls go up. Everyone is willing to do whatever it takes to survive in an increasingly hostile environment. And Austin’s daughter is caught right in the middle of this splintering society. But an even deadlier foe stalks them as they struggle across the landscape. Someone who hasn’t forgotten about the USB drive Austin possesses. And they’ll do anything to get it back. This novel contains violence.