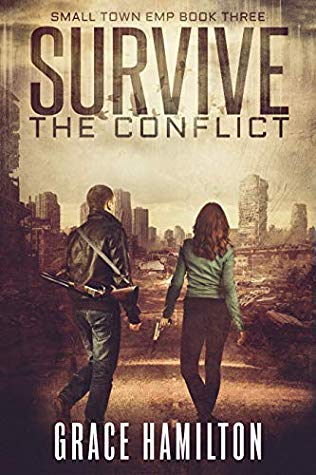 BLURB from Goodreads
The world has descended into a nightmarish hell. Death and destruction reign at every turn. Everywhere Austin Merryman has led his tightknit group of survivors has gone from bad to worse as enemies pursue them for the intelligence he possesses. Yet, his group remains steadfastly together even as the infighting continues.It’s only when the cryptologist traveling with them finally breaks through the last coded barrier, exposing the full extent of the data on the mysterious USB drive, that their luck finally seems to be turning. So many have already given their lives to secure the information, and now they know why.Now, a small window of opportunity remains for stopping the New World Order from succeeding in their plans, but Austin and his cohorts will have to move fast. Once again, splitting up may be their only option, but at what cost? And can they really launch the countermeasures that could take down the NWO’s plan for domination?But when the enemy closes in and lives of his entire group are threatened, Austin will be forced to choose between his family and the ultimate survival of the entire world…This novel contains violence and scenes with referenced substance abuse

REVIEW
Having read Survive The Chaos and Survive The Aftermath, I had to read this one. In fact, had they all been available together I think I would have read them back to back! The cover fits really well with the rest of the series. The people on the cover could represent either Austin and Amanda or maybe Savannah and Malachi.The book picks up where the other left off. The group have lost the majority of their prepping possessions along with Ennis’ prepper house.They are also still mourning the tragic loss of one much loved character (no spoilers here!) especially Savannah who feels more than a little responsible for what happened.There’s some unsettlement within the group when it is suggested they forget about the overwhelming task of defeating the New World Order and just find themselves a little hideaway and live off the land.
Sarah is still searching the usb stick that Callum gave to Austin and soon discovers a devastating plan that the New Order have. Luckily, she also reveals a way of thwarting that plan. However, it involves the group splitting up into two groups. The difficult decision is made, Austin will lead one team and Amanda will lead the other one. Everything seems settled and though a daunting task, though everyone has their mind set on the end goal of saving the world except one person who turns out to be out just for themselves. A traitor in their midst, the two teams blindly follow their respective plans. Also, to add to this mix of troubles, a guilt- ridden Savannah decides to go it alone. Austin’s first instinct is to head off after his daughter, but it is Malachi that steps up to the plate and reasons with Austin saying Savannah will be more likely to talk to Malachi and he can then persuade her to return to the group.Favourite characters in this book are again Austin and Amanda, always looking after other people, either in their group or anyone they meet along their arduous journey. I became fond of Malachi again in this book, he shows much more of his caring side. He takes on an adult male’s responsibilities when he goes in search of Savannah and then they both have to grow up rather quickly when they end up caring for a younger child. They both realise all the support and love they have had from their group and how they have been somewhat sheltered from some of the harsher atrocities that are out in the wider now uncivilised world.
I still enjoyed “hating” Zander and the New Order that is still pitting neighbour against neighbour in their fight to take over and remain in charge of the world that is now emerging from the aftermath of the EMP.I also still disliked Wendell! I was sad at the loss of another character at the ending of the book but it would have been totally unrealistic for these two groups not to have taken any casualties at all in such a dangerous world coupled with their near impossible mission too. In this book we also get to know some of the lesser characters better such as Harlen, Ennis, and Ezra. Gretchen remains a powerful character and by the end of the book I think Tonya has regained some of the strength she had at the beginning of the series.My immediate thoughts upon finishing the book were that I not only loved this book but the whole series! This last book was packed with action, a few of the fantastic characters were lost towards the end of the fighting. Brilliant read! Highly recommend the whole series!To finally sum up this whole series is brilliant! From reading the first words to the very last I found the series engrossing and really hated having to put the books down! As the series went on, I easily slipped back into the plot as I started each new book.