WHAT ABOUT THE BOY? BY STEPHEN GALLUP

I was given this paperback book directly from Stephen Gallup himself who posted it all the way from as you US residents say from "across the pond" I placed the book on my bookshelf in the living room as i had so many books to review and Stephen had said he didn't mind waiting for my review. I had planned to read it in the new year.....but somehow I kept going to the bookshelf and seeing the book and yeah it may sound stupid but it was if I was being drawn to this book, so sorry to those of you still waiting for reviews but I absolutely just had to read this book. 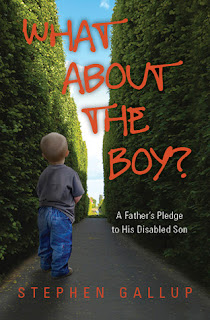 BLURB taken from Information provided by Stephen himself.


Nobody knew what hurt little Joseph. Perhaps some toxin had invaded his mother's body before his birth. Perhaps it was the difficult birth itself. Or maybe the origin of his disabilities were genetic. Whatever the cause, something had gone terribly wrong-but no one was offering solutions or guidance.
He cried most of the time, and thrashed about as if in great pain. He wasn't learning how to crawl, talk, or interact normally.
His parents sought medical help and were told at first not to worry. Later, the professionals recommended counselling to help them accept the reality that their baby would never be normal. They were told that nothing could help their son, and the quality of their own lives was at risk.
WHAT ABOUT THE BOY? is a first person true account of a family who refused to accept limitations when they were told they had no choice. It chronicles the willingness of a husband and wife to sacrifice their own lives for the sake of their child. This is a story of dissenters, whose challenge to authority was simply in the cause of achieving normal life, for themselves and for the developmentally disabled son. It is a lesson of trust and disappointment, a tale of loss and triumph , a motivating narrative for anyone who understands unconditional love.
At a time when developmental disabilities were a medical mystery, Stephen and Judy Gallup paved the way for future families.


So I decided I had to read this book and I think I went through every emotion there is reading this book. Their are the triumphs and happiness and joy when Joseph succeeds at a goal set for him by The Institute, and there are also disappointments, and despondency when he seems to reach a plateau and isn't meeting the targets that The Institute has set for him on their rigorous and at time arduous program for recovery. I do not want to give away too much in my review as I want people to read this book for themselves. I want them to feel the joy, wonderment, despondency and heart break in the book for themselves. You go through the book and i found myself thinking What if? What if the doctors had delivered Joseph sooner? What if he had been put on a medical program for Autism sooner? What if Judy and Stephen had had more help with the program? These are among the many questions you will ask too when you read the book.I cannot recommend this book highly enough, it isn't just a must read its a book that we should read!
I do believe in some sort of "afterlife" and would like to think perhaps Song Yi was brought into Stephen's life by "fate" Judy would have wanted him to be happy. Song Yi also seems to be good for and to Joseph. Judy and Stephen went through some dark dire circumstances and events in this book and you think How on earth did they go on, you think could I have done what they did? Then you read about Joseph and you know it was their love for him and from him that kept them going and you know should you have had to you would also do everything for your children too. Within the book you read a lot about peoples ignorant reactions and attitude, how they speak to Joseph as though he is a baby still. They should be ashamed of their staring and ignorance. Where I used to work an elderly gentleman used to come in the store with his autistic grandson and I used to see certain members of staff keeping their head down not wanting to help them find the books or whatever they wanted for them. You see I don't know if the staff thought the young man would be violent or what, he used to stand near the shelves and tap-tap-tap on them.I am not bragging or self promotions myself on a pedestal here but I found myself going out of my way to help these two customers, this went on for many months, the grandson would stand near the counter I was working on going through his tapping routine and would continue to do so until I said Hi and then one day he rewarded me with a smile and the joy on his Grandads face was immeasurable, a mixture of joy and surprise that his grandson was interacting with me. All the young man needed was a bit of understanding and a little attention. My blood boiled on occasion during the book at the ignorance and interference of people who did not know or take the time to get to know Joseph and his family. Susannah sounds an absolutely caring child and the way she is with Joseph in the book is brilliant, and I feel from the book that Joseph is probably secretly proud of his sibling too. Well I will end my review here or I will go on forever and ever, basically go out and buy the book it truly is an inspirational, heart breaking yet heart warming book.


Stephen Gallup also has a website called  A Father's Pledge
Posted by Jeanz xx at 06:00