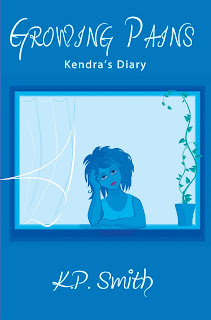 
Growing Pains; Kendras Dairies is the first book in the series chronicling the journey of Kendra Foster from adolescence to adulthood.I aspire to encourage, entertain, and inspire young adults. Life has its ups and downs, its bumps and its bruises. But with perseverance, determination, and faith you can be all you were born to be.
Never Give Up!
I initially had doubts as to whether I would enjoy this book....but I really did enjoy it. I think it is suitable for 12 years upwards really. I could identify with the childhood/adolescence of Kendra, I was that kid who couldn't do dance classes because her dad thought them a waste of money, so I understood where Kendra was coming from. I remember lying in bed listening to parents arguing, having the friend whose parents relationship with each other and their daughter appeared perfect. This book deals with some pretty heavily emotional stuff, from divorce and death to getting a part in the school play and having a boy ask you out or not ask you out as the case may be. I think although the cover is kind of colourful and depicts how Kendra feels it doesn't do the book full justice, as the book also has happy things within it not just problems.
I also could identify the fact kendra's grandparent not liking Kendras dad , and how that affects the whole family. The book touches on lots of different relationships, the one with Kendra and her mum, where her mum confides things to Kendra she perhaps should not have as she later regrets it. I enjoyed reading of the relationship between Kendra and her younger sister Patrice, at time Kendra is more in the mothering mode than her mother to Patrice. Kendr's rlationship with her dad is awkward as they only ever talk sport (I remember my own dads disappointment at me being a girl and not wanting to watch the rugby/football etc)You also see the relationship with Kendra and Katrina and how they grow apart and then back together only for an unexpected twist to separate them again. there is also the whole which school will I get into scenario, though the system is slightly different over here in the UK the dilemmas attached to changing school are still similar. I found this book really thought provoking and think it would be useful in schools for the 11 and 12 year olds to read to help prepare them for what may happen in life. The book also touched on predjudice, not a simple black and white one, the kind that goes on within the blacks and whites, the shades of black etc.
I just want to thank K P Smith for sending me this book to read and I apologise fr how long it took me to get round to it due to illnesses etc. I found this book cathartic and a really relaxing read. There was something happening most of the time as several characters stories were being played out all at the same time. A very thought provoking book! I would also like to add the ending left it so there could be another book and I have to say I would really want to read it too.