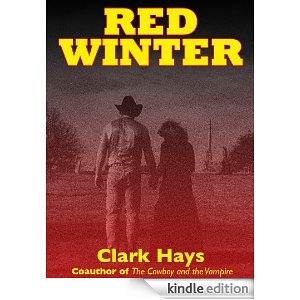 How do you kill someone who just won’t stay dead? It will take more than a steady hand filled with a blazing six shooter if anyone in LonePine lives through the “Red Winter.”
Sheriff Early Hardiman has seen a lot of bad things in his life, but nothing could have prepared him for the first Vampire to visit the Old West.
The year is 1890 and winter is closing like a noose around tiny LonePine, Wyoming. When the snows come and the mountain passes are buried and the train stops running, there’s only one way to leave LonePine — boots up in a pine box. For Sheriff Hardiman, once one of the fastest guns in the West, it’s another four months of watching over the foolish and the foolhardy and praying for the arrival of spring. At least he has the lovely Miss Grace, his new wife and former madam of the infamous Pearl brothel, to keep him company.
But then a murderer turns up out of the cold and dark. People are being killed and not in the usual way, either — they are dying hard, tortured and drained of their blood. Worse, it appears Miss Grace may be next on the list.

Fans of “The Cowboy and the Vampire” (Midnight Ink, 2010) know that LonePine will see plenty of Vampires in another 120 years. But in 1890, no one had yet even imagined the kind of terror Jericho Whistler brings with him to the isolated little town when he hunkers down for a long winter of feasting on the terrified and trapped residents of LonePine.

What readers are already saying:
“Reminiscent of old John Wayne movies except with vampires.”
“Red Winter pistol whips you, throws a lasso around your boots, secures the other end to the horn of the sheriff’s saddle, spurs his horse hard in the flanks and drags you to the end of a book you cannot stop reading.”
“Fun addition to the Weird West genre!”
“Early Hardiman — badass sheriff — finds more than he expected when mutilated bodies begin to fall on the streets of LonePine. Red Winter is creepy, quirky, and leaves you wanting more.”
“My favorite character is Joe, the crazy wolfer who says, “That sumbitch won’t die.”


There is a tour wide giveaway-open internationally