Janet Hurst-Nicholson writes for a wide range of ages and her books are suitable for many people, below is just four of her books for you to take a look at! 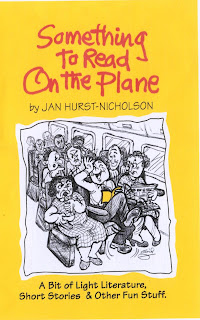 If you've ever found yourself stranded on an aeroplane with nothing to read, then this book provides the answer. It is a light-hearted variety of humorous articles, short stories ranging from hypochondria to murder, plus a quiz, agony aunt column, limericks and a collection of malapropisms to keep passengers amused.
He bought a sexual title flat.
For your reading comfort we have used a decent-sized font and made the book pocket-sized, and for those who only read books with pictures we have included a few illustrative drawings.
A great book to keep with you whilst travelling, and a perfect gift (suitable for both men and women) for someone who is going on a trip. 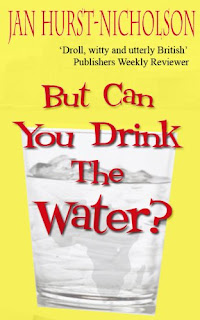 BLURB taken from Goodreads
Is home more than ‘where the heart is’? When Frank Turner informs his wife and teenage son they are emigrating from Liverpool to sunny South Africa, he is unprepared for their hostile response. His defiant son makes his own silent protest, and his wife’s assertion that “we never shoulda come” is parroted at every minor calamity. The bewildered working-class scousers are thrust into an alien world of servants, strange African customs, unintelligible accents, and unexpected wild life (‘crocodiles’ on the wall). Their uneasy interactions with Zulu servants, Afrikaner neighbours, and foreign officialdom exposes their naivety, but they each learn to cope in their own individual way; Mavis overcoming homesickness by hugging the knowledge that when Frank’s contract ends they can return home; Gerry’s sullen resentment giving way to love of the outdoor life, and Frank masking his own doubts with blustering optimism and bantering sarcasm. Having overcome culture shock, the arrival of Mavis’s parents introduces a divided loyalty when Gert and Walter’s National Health glasses and ill-fitting dentures are seen through the eyes of the Turner’s new South African friends. And when Mavis’s sister ‘our Treesa’ and her opinionated husband Clive visit, Mavis surprises herself by hotly defending SA. The turning point comes when the family return to Liverpool for a holiday. Gerry has outgrown his former feral friends, Mavis realises she is now an expat; a misfit in her former home, and Frank has fresh misgivings about their future. If home means a sense of belonging –where do the Turners belong? 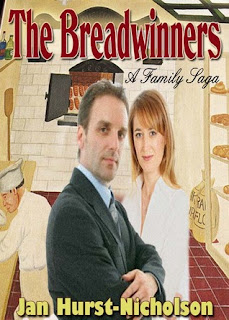 BLURB taken from Goodreads
When an ambitious young immigrant opens a bakery in competition with his vengeful former employer it is the beginning of a bitter rivalry that spans three generations of hatred, jealousy, passion and betrayal as the bakeries grow from small family businesses into large corporations. It is New Year’s Eve 1924 and the fiery and volatile Charles McGill is devastated when Addy Brody, the woman he loves, announces her engagement to Lucas Connelly, his friend and co-worker. Charles drowns his sorrow in drink and seduces Hilde Richter, the unattractive daughter of a wealthy Durban businessman. When Hilde finds she is pregnant her father offers to set up the penniless Charles with his own bakery if he will marry her. Charles readily agrees and, unknown to Hilde, the two men draw up a contract. It is the beginning of a battle for supremacy between Charles, Lucas, and Miles Davenport, their former employer. As the bakeries grow and prosper, acrimony begins within the families, pitting brother against brother, and Charles becomes increasingly dissatisfied, realising that success means nothing if he cannot have the woman he loves. The story covers a period of sixty years and leads us through the fortunes, joys and sorrows, successes and failures of the three families as they survive the great depression, the war years and the isolation of South Africa. 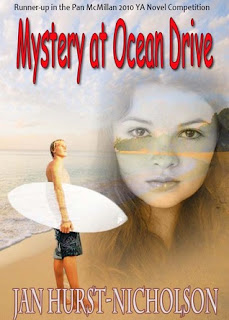 BLURB taken from Goodreads
MYSTERY AT OCEAN DRIVE a young adult adventure.When 17 yr old Jason Hunter sets out to discover the identity of the mystery girl at Ocean Drive he and his friends find themselves caught up in a risky intrigue. Jason is delivering newspapers on his motorbike when a Mercedes sweeps out of a driveway in front of him. He loses control of his scrambler and almost ends up under the car’s wheels. An attractive teenage girl leaps out to ask if he is hurt, but before Jason can reply the girl is bundled back into the Mercedes and driven off.Jason’s instincts warn him that the girl is in trouble. The following day he sees her in an upstairs window, but when he asks to speak to her he is told that there is no young girl living there. Why?Jason is not about to give up and he enlists the help of his friends, Mark and David. Together they make a daring attempt to learn the girl’s identity, but just as it seems to be working, things go horribly wrong... Has Jason’s intriguing mystery now put all three boys in danger?MYSTERY AT OCEAN DRIVE was a runner-up in the Citizen/Pan MacMillan 2010 YA novel award.
Posted by Jeanz xx at 09:00