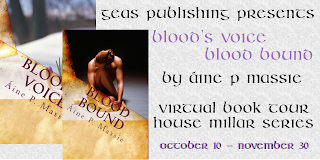 My name is Áine P Massie.  I was born in a small town in Florida, USA and now live in Wisconsin, USA

Well, that would depend on which age I was when you asked.  What I wanted to do was art and architecture.  My major in college though was Early Childhood Education, specializing in ages 0-5 with a minor in Deaf Studies.  However, I have always written, using it for both creative release as well as to ‘get out’ my thoughts and emotions.

I have always written so I’m not sure how to define the “moment” in this case.  I suppose, in this case, I would say when I had about 50k words written and knew I would be finishing “Blood’s Voice” and already had plans for two more books. ;)

It took me nearly two years but as I publish through my personal label, Geas Publishing, it didn’t take any time once ”Blood’s Voice” was complete.

I am a full time mom, one child in home with Asperger’s and one with a speech delay.  I worked FT until I was 6 months pregnant with my youngest though.

“Blood Bound”
After poisoning, near death attacks, consummated passions, and possible insanity visit Anya, Nicholas, and Declán they embark on their future.

The first took nearly two years.  The second took about one.  I am working on 3 and 4 now and hope to have at least one of the two completed by next fall.

“Blood’s Voice” was both easier and harder depending on issues.  I didn’t have to remember what I’d already done and created and had the freedom to do as I wished but … it was also a very daunting task to write a cohesive story with so many word while taking care of my family.

I will probably stick to Paranormal Romance as that’s what I enjoy the most.
I am working on Glamour Blade which is part of the House Millar series but is told from the POV of Sir Rory, a Fae warrior instead of by Mistress Anya of the vampire House Millar.  I am also working on (tentative title) Blood’s Rebellion which will again be from Anya.

“Blood’s Voice” simply because it’s my first.  I do love some of the character development in “Blood Bound” though.
I usually answer Declán but Louie is catching up fast.  Declán is so laid back and loving no matter what.  He refuses to allow logic or heritages interfere with his love for Anya and Nicholas – he’s a Guardian, natural vampire hunter.
Louie is fast catching up simply because he’s just so to the point.  Check out “Blood Bound” and read his explanation on his new relationship.  Love ‘em!

Most of my life.  There are so many great authors out there but Dr. Seuss has to be my “Wanna be like” in many ways… not how long it took him to ‘make it’ but in how he never let the nay-sayers stop him from what he enjoyed and believed in.

Telling stories to my kids, gaming (Palladium books mainly), news, dreams, and old stories I’ve read or heard.  Add a bit of fancy and poof, you have my writings.

Yes.  I had both a few friends and some of my family read both books before release.  My 15 yo son and his girlfriend would text me notes and edits they noted even.

Yes.  All the reviews I know of have been from copies gifted to the reviewers in question.

Yes, even when I hate them. LOL

Toughest was getting a 2.  I’ve never been good with negative criticism, right or not.
Best would probably be my very first.  It was a 4 stars but I was nearly ill waiting to read it, I was so nervous.  When I got the 4 I think I squealed, lol (no I’m not a 12 yo girl but hey… it was my first review and it was a 4 ;) ).

I design everything about my books from the words and layout to the cover (with help from my printer).  The titles come from what I feel is a key part of the book.  In “Blood’s Voice,” Anya’s vampire voice is a key boon and curse.  In “Blood Bound,” the triad is literally bound as well as a bound servant enters the mix.
I design them at this point.  I would love to have them professionally done but for now, you all have to suffer with my creations, muwhahaha.

I spend a lot of time contacting Book Review sites, have my own blog site for the series, FB, Twitter, GoodReads, etc.  I also count on word of mouth a lot.

Enjoyment factor.  If you can engage with the characters and enjoy the story it’s good in my opinion.  A good plot is also needed.  In my stories the plot is often not what it seems to be… or at least whose behind things isn’t.

Sadly, yes.  Usually I stop writing for a while.  Do something else and then come back, reread from the start, and so far have been able to pick up the thread and write.  I know for many that doesn’t work but for me, it does.

Yes though not totally.  To make that make sense I’ll explain… Many of my characters are patterned after people but often a character is styled after a combo of more than one friend.  Or, in one case, one friend was the pattern for two very different characters.

Yes and no depending on how you see it.  I have a lot of GLBT issues as well as the main three characters are in a triad relationship.  I have received more negativity and even a few hate letters for those features in the books but I stand by them.  Love is love, is love, is love.  Period.  In the story, even much of those close to the triad don’t “get” their relationship but chose to accept their love… well, save Dec’s dad…
So the ‘moral’ if there is one would be love is love, no matter gender, structure, or style.
I’m sure others would point out other areas addressed but J
Is there a certain Author that influenced you in writing?
I don't read authors so much as books but if I had to list them… Dr. Seuss, Stephen King, Anne Rice, J.K. Rowling, Geoffrey Chaucer, Jane Austen, Stephenie Meyer, Terry Pratchett, Peirs Anthony, Mary Higgans Clark, William Shakespeare, Oscar Wilde, Edgar Allen Poe, Tolkien, Isaac Asimov, CS Lewis, Richelle Mead, Terry Goodkind, and too many others to even think of much less name.
I have very eclectic tastes, as you can see, lol,

eBook.  I publish tangible books too but I prefer books that can go anywhere (I sooo want a Nook or Kindle for my b-day, lol).

I’m not sure I can narrow my love of books to one and my reading desires change often… But I’ve read all of my most fav stories many times.  I like rereading book.  If others can watch the same movie over and over I can read ;) right?

I think they can but often don’t.  Too often so much is removed and/or rewritten that it messes up with the story or the characters.  I hate getting attached to a character and the watch the movie and see them acting out of sorts for who they are.
I don’t which I would consider best/worst as those I have chosen to see the movie of I try to go in without thinking of it as an adaptation so I can view the movie on it’s own merit, not as it relates to the book/s.

eBook. I’m currently rereading the With or Without series (m/m werewolf stories) and am enjoying it just as I did the first time through.  I try to stay away from books that would ‘clash’ with what I’m writing so no vamp stories atm.

I certainly hope not.  While I do love eBooks I would be heart broken to not have my paper and hard back books.  Plus, some things just don’t convert well.

If my kids schools are any sign then yes.  They each have homework plus XX number of pages or minutes to read every night.  During the summer they all had lists to work though as well.
I’m not so sure on the writing.  I think little ones often are but as they grow I often wonder about research vs. creative writing projects.  I suppose it depends on the child really.

Any hate books.  I have read many that I didn’t care for but had to read and finish for one reason or another but now that I have a choice, I won’t read hate speech work.

There are so many great new authors out there.  Honestly, I would recommend that joining in on Teaser Tuesdays would be a great way to find them.  I love bouncing around the net finding new authors and books this way.

The biggest complaints I get are about the GBLT and Triad relationships – won’t change those, period.  The other is the non-American spelling in the books… but again, there is a reason for that.  If the character telling the story had been American the spellings would have been too.  (That and I naturally spell colour and centre, lol).

I think many are done very well.  I wish I had the patience and skill to make them myself.

Write what you love and let yourself love what you write.  There are many that will try to nay-say your work or degrade it for many reasons.  Don’t give up.  For every one that fusses there will be tons that truly see the story and love it too.  Too often we let reviewers and critics dictate our own worth and work.  Don’t let them!

Do I? No
Would I? Depends.  I’ve thought of it, if I decided to change genres drastically so as to completely separate my works.