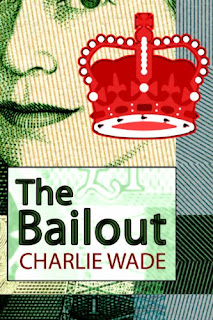 BLURB is taken from Goodreads
The credit crunch was just the start.When the banks crashed again in 2012, the shockwaves led to countries and even continents failing. A mysterious, Far-East consortium's bailout of the UK leaves small town newspaper journalist Rob wondering at what cost. Printing his own paper telling the truth, Rob is captured and taken along with four other dissidents to a labour camp. Escaping on the way they run, joining forces with other escapees. Eventually recaptured, they're taken to a labour camp and find out the consortium's real aims. Determined to make a difference, they engineer a stand against the consortium.


Q What is your name, where were you born and where do you live now?
A Charlie Wade. I was born in Oxfordshire in the UK, but moved around a lot. I'm now settled in Derbyshire, near the Peak District.Q Did you always want to be a writer? If not what did you want to be?A I was never sure what I wanted to be. I ended up becoming an Accountant, but I've always wanted more. I've been writing on and off for twenty years now, about half my life. I enjoy it more than the day job but until it pays the bills I'll just be an accountant.Q What is the name of your latest book, and if you had to summarise it in less than 20 words what would you say?A The Bailout. A post credit-crunch dystopia about normal people turned rebels and what effect the collapse of Europe has on their lives.Q Who is your publisher? or do you self publish?A The Bailout is self-published. A small publisher called Trestle Press is releasing a series of my short stories as e-books The first one, Das Slap, was out on the 2nd November. I submitted The Bailout to a few agents, and they all said the same thing: new authors are nigh on impossible to get published at the moment. Also, world events seem to be catching up quickly with my fictional dystopia so I thought I'd release it quickly, just in case.Q How long does it usually take you to write a book, from the original idea to finishing writing it?A The Bailout took four months to write then another three months to edit. My first book, Spies Lies and Pies (a comedy spy thriller) took a year to write.Q What can we expect from you in the future?  ie More books of the same genre? Books of a different genre?A I've written another book, a crime thriller about a rookie contract killer who's first hit goes disastrously wrong. It's called Seven Daze. This just needs finishing off and editing then will hopefully be ready for next year.Q Do you have a favourite character from your books? and why are they your favourite?A Yes. Barry the inept spy from my comedy spy book. I like him because he's just the opposite of suave spies in films and books. Q How do you market/promote your books?A This is the hard bit. It's a big world out there and trying to attract people's attention is difficult to say the least. I've got a blog where I write occasional short stories, highlight other writers and do occasional reviews. I'm also on facebook and twitter. Hopefully, people will get to know my writing over time and I'll pick up more and more readers.Q What do you do to unwind and relax?A I spend time in the garden and greenhouse pottering around during the summer and read books in the winter. Though with the amount of slugs that seem to eat my vegetables, it's not always that relaxing.Q Are there any hidden messages or morals contained in your books? (Morals as in like Aesops Fables type of "The moral of this story is..")A I've inserted a few long winded jokes here and there that sometimes take thousands of words to come to fruition. I don't know if anyone has found one yet.Q Is there a certain Author that influenced you in writing?A There's three. Stephen King, Irvine Welsh and George Orwell. Each has something different to offer, but they are all inspirational in their own way.Q Do you think ebooks will ever totally replace printed books?A I hope not, I like reading paper books. I can see a point, thirty years from now, where digital becomes the major player and paper books are just special editions, but, like vinyl records, they won't completely disappear.Q Are there any New Authors you are interested in for us to watch out for? and Why should we watch out for them?A Matthew C. Funk. He's got a real gift of putting you right in the middle of a story. I think he's working on his first novel, but some of his short stories are dotted around the internet. All are worth a read.Q What piece of advice would you give to a new writer?A Don't give up the day job! It's a long hard slog but when someone has read something you've written and asked for more, it all becomes worth it.My Website is http://spiesliesandpies.blogspot.com/Twitter @CharlWadGood Reads http://www.goodreads.com/author/show/4944472.Charlie_WadeThe Bailout on Amazon http://www.amazon.co.uk/dp/B005VCFNFY 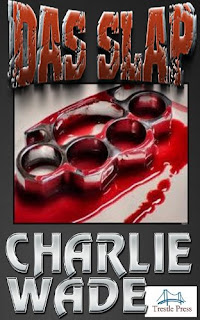 BLURB taken from Goodreads
Das Slap is the first story in the Bites of Grime series.When Sally Kamrat, a karate teacher with anger management issues, discovers her friend has been attacked at night, she vows to find the man responsible. Embarking on a one woman crusade to bring the attacker to justice, she leaves a whirlwind of destruction. Though her search meets dead ends, she soon finds the answer is too close for comfort.Charlie Wade is forty years old and lives in Derbyshire. He works as an accountant to pay the bills, but prefers the evenings when he can write. He's written three novels and many short stories which have appeared both on line and in print.

Thank you for taking the time to take part in this interview!
Posted by Jeanz xx at 16:00