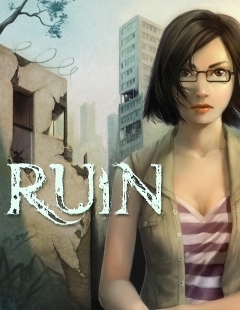 My full name is Nina Martinez, but I use N. M. Martinez as my author name. I was born in Fort Ord, California, the daughter of a military retiree. (He always calls me his retirement present; I happened to be born right when he retired.)

I still live in Monterey Bay.

Did you always want to be a writer? If not what did you want to be?

Since about fifth grade I've wanted to be a writer. Even before that, I think it was clear what I was meant to do. I used to be one of those kids who'd write on any paper left lying around. My dad had to make sure I had my own supply of paper, pens, and a binder to keep them in since I was about three or four.

My book is called Ruin. It's about people with powers trying to learn to live an average life. There are no superheros in this story! It's real people with real problems with a little twist.

I'm still debating this. The current releases I have planned are within the same genre. I generally write speculative fiction, tossing regular people into strange situations. But I do have a lot of strange and random story ideas, so I hope to try something new soon!

Ruin is the first book in a planned "series." It won't be like normal series though. This one will be more about individual stories that will connect through similar characters and crossover moments. As more stories are released, a clearer picture of the world will be revealed.

I did not with this first book. I just released it to let it get out there and meet me new readers. For future novels, I will probably start requesting advanced reviews.

Yes. I haven't had very many, yet. Still, I get a little nervous when I notice a new review. But I like to hear what people think and try to learn from any mistakes I make.

I went with a professional. Sarah Ellerton. She also designed the type for the cover.

Which format of book do you prefer, ebook,hardback, or paperback?

I thought I was okay just having an ebook that looked awesome on my Kobo, but then I got the paperback version. Holding a real book that I'd poured my all into was so moving. For someone who is supposed to be about the words, I find I have trouble describing it exactly.

After I finished reading through the paperback version of the story one final time, that's when I knew that I had the story exactly right. This was the story I wanted to tell, exactly as it should be.

What is your favourite book and Why?  Have you read it more than once?

Alice in Wonderland and Through the Looking Glass. I read it every few years. It's just one of those books I get a craving for and must reread.

The story is about a strange place and strange characters, but through it all, Alice is a normal girl who has to find her way. I love that about it. Plus, I love that there are so many different readings. I think every reader can put their own slant on the story. That's a good story to me.

No. I love ebooks very much, but there is still a power to physical books. Even with the younger generation, there are still plenty of people who enjoy actually turning pages rather than clicking a button.

Do you think children at schools these days are encouraged enough to read? and/or do Imaginative writing?

I actually studied to be a teacher before the economy took a downturn, so I got to work in a lot of elementary classes. Schools do a lot to encourage reading. They usually go for reading time and set a goal for the students for the year. Each classroom participates.

More importantly, it was what the teachers did to encourage reading. I walked into some lovely public school classrooms that had a special reading corner set aside for the children. These were areas that were quiet and comfortable, and the children looked forward to getting a chance to sit in the reading corner and relax with a book. Library days were a magical time for the students. They would proudly show off what books they were reading or had read. And in one school, teachers were partnering up so that older kids could read to the younger kids. The kids loved it.

I'd be remiss if I didn't take this opportunity to give a shout-out!

Let me introduce my critique partner/unpaid-editor, Laura Rae Amos. She has a book that will be coming out next year. She's aiming for Spring and it's so close I can already see it! She's a wonderful writer. Her stories revolve around the ordinary lives of normal people, and she makes it into poetry. There is a beauty to life, a fragileness, and she manages to capture that. Her stuff is so easy to fall into. Keep an eye out for her!

For a new writer- write and then write more. Don't stop, don't be satisfied. You know how people say your early stuff is going to be bad? It probably is. You can be good and still be bad at the same time.

Thirty years ago, there was a revolution. Humans who had been granted powers through experiments performed upon them against their will, broke free from the labs and burned across the land, creating a dangerous new territory called the Wildlands. Paula has grown up in the Neutral Territory, never knowing a time without the neighboring Wildlands as a threat. Her government does what it can to protect her people, but they still live in fear of the powerful Wildlanders invading their safe and protected territory. Then one night Paula's mother is arrested, and Paula is banned from the Neutral Territory to the Wildlands. Now she must make a new life for herself in a territory of people she knows will not be welcoming.