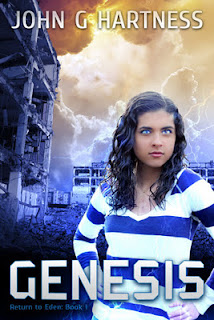 Guest Post - The Genesis of Genesis
By John G. Hartness

I’ve been wanting to use that title ever since I settled on the name of the book. This book, and the trilogy that it’s part of, have their origins in multiple places in my history and my reading life, along with more than a dash of my own conspiracy theory issues.

I wanted to write something very different from The Black Knight Chronicles, my snarky vampire detective series, sort of a way to stretch my literary legs a little. I also wanted to write something featuring a set of characters that are dramatically different from my real life, so a group of teenagers is about as far away from me as I can get! I remember being a teen, and how much more intense everything was to me then, so I really wanted to try and capture that intensity in the action of the book.

Genesis tracks a group of teenagers through an EMP (electro-magnetic pulse) attack that destroys anything with a computer chip, basically throwing the world backwards in time about a hundred years. So these teenagers have their entire world wrecked in an instant. Not only do they now have no TV, no internet, no cell phones, but most of them also have no cars, and there’s no electricity because the power plants are controlled by computers!

So that’s the world I throw these characters into, and to make matters worse, without all the electro-magnetic interference from technology, magic is able to come back into the world. So these kids have to deal very quickly with a world that’s very different from the one they woke up in. How they deal with that is a lot of the fun in the book for me. Not only do they have to address issues like transportation and keeping food fresh, but they have to deal with the normal things, like forgetting that there’s power and automatically opening the fridge for breakfast.

I really enjoyed writing the dialogue in this book, because there are a lot of characters, and they’re all very different. So the scenes developed differently depending on who was around. If it’s just the siblings Matt and Christin, then the dialogue happens one way. If the pretty new girl Angie is around, the boys have a very different way of reacting to things. And when Christin is around her brother’s cute friend, then things get different in a whole different way. We’ll see more of that in the second and third books in the series, as the relationships I’ve started off in Genesis really start to flesh out and take shape.

So all in all, this book was a lot of fun to write, a great change of pace from my other books, and I hope you guys will come along with me to check it out!