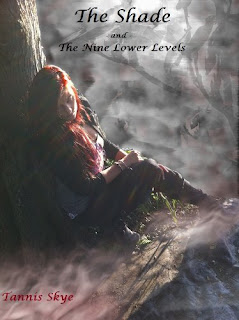 My name is Tanis Campbell, but my pen name is Tannis Skye since Skye is my middle name. I was born on The Sunshine Coast and I live in Vancouver now.

Did you always want to be a writer? If not what did you want to be?
I have no idea what I wanted to be. I am not really into going to school in the hopes that you figure it out along the way, so it took me until I was 23 to really know that this is what I am supposed to be doing. Realistically, I should have known sooner. I just never slowed down enough to realise it right away.

When did you first consider yourself as a "Writer" ?
When I was fifteen, I had a minor stroke on the right side of my  body in combination with Viral Meningitis (brain virus.) Because of that, I had to move home – I have moved out and was living with a roommate. After a month of recovery and retraining my eyes because they had gone crossed, I had to go back to my old school to complete the last three months of class. It was there I met Mr. Marshall in English class. I am bad with nouns, verbs, Shakespeare and so on because I don’t care for them much and likely, he should have failed me because of that and the fact that I am not the best speller. But he and I bonded over our love of short stories and poems. I couldn’t focus on anything after my stroke and my teachers all gave me a pity passes, especially in Math and Science. But in English I got the best of my grade and never liked anything more. He was the best teacher and the biggest influence. I think, looking back now, that is when I knew. It just took me seven years after the fact to get the ‘ah-hah!’ moment.

Do you work another job as well as your writing work?
I work full time with a family as their nanny. Thankfully I am able to do my 40 hours in four days and I stopped doing a second job because I needed a break, so I was able to do my writing then. So when I am not writing, I have been helping to raise two beautiful boys for two years – 4 and 2 years old.

What is the name of your latest book, and if you had just 20 words to use how would you describe it?
It’s about the origins of vampires and how they came to be and one that is taking back his humanity.

Who is your publisher? Or do you self publish?
I’m self-published. But not for a lack of trying in the other areas!
What can we expect from you in the future? ie More books of the same genre? Books of a different genre?
I know there will be at least two more books in The Shade Series, but I also like writing non-fiction. Two are in the works; one that will be called “The Girl Prince” and the other “Sewer Sisters.” The latter is about sisters who live in Columbia who’re homeless and thus, live in the sewers. Businessmen and off duty police men hunt these people for sport, claiming they’re doing the area a great service. It’s baffling to know this is not a fictional story.

What genre would you place your book into?
I’d put my book into a dark epic fantasy-fiction category.

Do you have a favourite character from your books and why are they your favourite?
My favourite character is Fly believe it or not, and my fiancé hates this, but I based a lot of her after him. They’re proper, stringent and goodie-two-shoes with much too large of a vocabulary. I get her to say a lot of lines that David says to me, which makes sense, since there is a lot of myself in Riley.

Where do you get your plot ideas from?
All of my book ideas mostly come to me when I am sleeping. The outline of the first Shade book came while watching a documentary on heaven and hell, but the rest unfolded in a few dreams. My type-a body never slows. I’ve tried meditation, yoga, you name it! I can’t complain though, as I don’t mind it.

What was the best/worst review you have ever had?
The best review I ever had was that “I can hear Riley’s voice” and since I like to be able to feel that when I read, I enjoyed hearing it.
Worse review was that I should not mix ‘heaven’ and ‘hell’ into how vampires came to be created as it is too many story lines.

How do you come up with the Title and Cover Design for your book/books? Who designed the Cover of your books?
I have no idea how my title came about. Likely in a dream. The cover art was supposed to be this stunning model and a photographer but then everything became complicated with contracts because it would be the cover of a book. I wanted to bypass all that and simply sat for the picture, had David take it and then asked my friend do some graphics. Vuahla!

How do you market/promote your books?
I promote my book the same way I would go about knowing if I wanted to read a book; through bloggers and reviewers. Then the basic, amazon and smashwords. Thankfully, I have been a member of a lot of bogs and writing forums for a long time, so there are a lot of people kind enough to help.

What do you think makes a book a really good/best seller?
To be a best seller I think you need a great title name, unique premise and some argue with me, but I think most of it has to do with catchy cover art. It needs to visually appeal. Then the writing needs to be done well enough to keep them hooked.

What do you do to relax and unwind?
The only way I know how to relax really is when I am working out hard or doing kick-boxing. It’s the only time I am so focused or exhausted that my mind has no choice but to concentrate on one thing.

Have you ever based characters on people you know or based events on things that have happened to you?
About eighty percent of the places and people in my book are based around what and who I know. I think it makes it feel more authentic.

Are there any hidden messages or morals contained in your books? (Morals as in Aesops Fables type of "The Moral Of this Story is")
The only ‘moral’ of my book is that things are not always as they seem – what I mean when I say that is not that I believe in vampires or so on, but I do believe in mediums, clairvoyants.

Is there a certain author that has influenced your writing
I love Brent Weeks as an author. His ‘Shadows’ books have some of the best writing I have ever read. I could read them a zillion times and still discover new things to gush over.

Which format of book do you prefer? (paperbacks, ebooks or hardbacks?)
I’d prefer to have *my* book in hard cover and paperback because there is something about knowing people are holding my books (and free publicity!) that really tickles my fancy. Personally, I read most everything through some form of ebook because it is so convenient and the prices are far better.

Do you think that books transfer to movies well? Which is your favourite/worst book to transfer to movie?
I wrote my book with the intention of it being a movie someday. I know, the ego on me, right? If and when it does, I’d love to see it done as a cross between Interview With a Vampire, Priest and Lord of The Rings. (LOTR mostly in the second book, kind of feel.) So yes, I think books can transfer well, but I always think it is wise for the author to be involved so the vision is clear. I have seen some books end up nothing like they should have in movie. It was upsetting. Eat Love Pray was a movie I was not a fan of, but loved the book.

What are you currently reading? Are you enjoying it? and What format is it ? (ebook,paperback or hardback)
I’m reading ‘The Street Lawyer’ right now, it’s a nonfiction and a great break while I write my second book in The Shade Series. It’s in paper back and I borrowed it from Erin, whom I work for.

Do you think that ebooks will ever totally replace print books?
No. Ebooks won’t replace normal books. Chapters would throw a temper tantrum, that is for sure. But more importantly, writers wouldn’t allow it. We’re greedy and want all three: soft, hard and e!

Where can readers follow you?
Readers can follow me on twitter under TannisSkye. I actually just made an account because of my book. I also don’t use Facebook a lot in my personal life (I know, how strange!) but I will be making a page for the book, also called TannisSkye. The best place to reach me in my new blog, which is also the place to download my book for free for the next two weeks.www.tannisskye.com

I can be found at amazon and smashwords under TannisSkye, just look up The Shade and The Nine Lower Levels, and bam, that is me!

The Shade and The Unholy Priest is scheduled to be released via eBook come late Jan/Feb 2012. Maybe sooner, as I am going to be working on a non-fiction at the same time and an autobio and I plan on making this a priority!
Posted by Jeanz xx at 13:00