How long have you been writing?, and who or what inspired you to write?
I loved writing stories when I was at school. The teacher would give us half an hour to scribble away in our exercise books, and allow our creative minds to roam free. I would imagine fabulous adventure stories, then be disappointed when we were told to put our pencils down before I’d finished. After many frustrating English lessons like this, I realised that I didn’t need permission to write, I could do it whenever I wanted. That’s when I started my first novel, bashing it out on an old typewriter onto using orange paper (which our family had lying around for some reason). It gave me great satisfaction when I finally finished it and the story was told.

Did you always want to be a writer? If not what did you want to be?
When I was a child, I wanted to be a teacher because I was good at school, I liked reading and writing, and I wanted to keep having long summer holidays when I grew up. Then, at the age of 14, I joined a voluntary radio station at my local hospital and decided I wanted to be a DJ. After university, I trained to be a radio journalist and got a job newsreading and reporting on local radio, but by the time I’d done that, my ambition had waned somewhat. It didn’t help that I was getting up at 4am for the breakfast shift. So, yeah, there were other things I thought wanted to do, but it’s interesting that all through this time I was writing stories whenever I could. I wrote several novels in that period - all of them unpublished, much to the relief of the reading public. I hope I’m a much better writer now, thanks to all that practice I put in while I was working at other things.

What is the name of your latest book, and if you had to summarise it in less than 20 words what would you say?
If Wishes Were Husbands: Rachel finds out what it’s really like to live with her dream man when he materialises on her sofa.

Where do you get your book plot ideas from?
Life. Something happens to me or to a friend and it starts my mind whirring. I take that incident or idea and turn it into something much larger and more dramatic. Like the idea for If Wishes Were Husbands came from all those questions I kept getting asked while I was having my hair cut or getting my nails done. I wasn’t happy in my life at the time, so I didn’t really want to talk about it with a stranger. I started to fantasize about inventing a different life for myself that I could talk about instead. That’s when I started to wonder what would happen if a character did that in a book and those things came true…

Have you ever based characters on people you know or based events on things that have happened to you?
I used to write a lot of fantasy and made up pretty much everything. But now I’m writing more realistic fiction, a lot of it comes from real life. It’s much more believable that way. For example, when writing a scene about my character buying a dress that flatters her body shape and hides her bulges, I based it on an actual dress that I own. There’s no need to make that sort of thing up. On other occasions, whole plot threads have been drawn from real life. In If Wishes Were Husbands, one of the women marries a man she doesn’t like because she’s so desperate to have a husband and a family. That actually happened to a friend of mine some years ago. I was so shocked by what she did, I had to write about it.

Do you have anybody read your books and give you reviews before you officially release them?
I send my first drafts to a brilliant friend called Julia. The great thing about Julia is she’s a veracious reader of multiple genres and she’s not a writer, so she can give me a reader’s perspective without trying to re-write it for me. With my last book, she pointed out my main character was behaving in an unsympathetic manner towards the end of the novel. When I went back and read it, she was totally right and I changed it. I agree with about two-thirds of the things she mentions, but I don’t change everything she asks. My character, Rachel, still drinks much more wine than is good for her, for example.

What can we expect from you in the future?  ie More books of the same genre? Books of a different genre?
I’m writing a series of short stories at the moment, all fun romantic comedy-type things. I’ve also got a short story in an anthology called Elemental, being published by Roberts Press at the end of 2011. Then, next year, I’m scheduled to write another fun novel about a woman who finds love as she’s thrown into unexpected circumstances.


Where can readers follow you?
Come find me at: http://www.elizabethkyne.co.uk  where I’ve just started a blog - all links to Facebook etc are there. 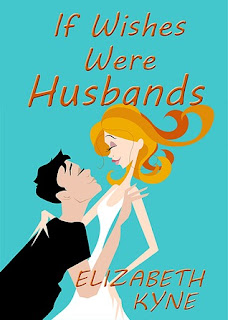