The Genre is Paranormal YA.

Alex Kosmitoras may be blind, but he can still “see” things others can’t. When his unwanted visions of the future begin to suggest that the girl he likes could be in danger, he has no choice but to take on destiny and demand it reconsider. 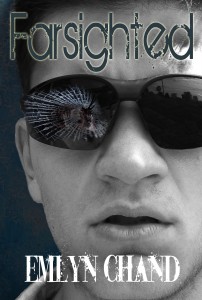 Alex Kosmitoras’s life has never been easy. The only other student who will talk to him is the school bully, his parents are dead-broke and insanely overprotective, and to complicate matters even more, he's blind. Just when he thinks he'll never have a shot at a normal life, a new girl from India moves into town. Simmi is smart, nice, and actually wants to be friends with Alex. Plus she smells like an Almond Joy bar. Yes, sophomore year might not be so bad after all.

Unfortunately, Alex is in store for another new arrival—an unexpected and often embarrassing ability to “see” the future. Try as he may, Alex is unable to ignore his visions, especially when they begin to suggest that Simmi is in danger. With the help of the mysterious psychic next door and new friends who come bearing gifts of their own, Alex must embark on a journey to change his future.

In this enthralling debut novel, Emlyn Chand creates a world in which friendship, perseverance, and a handful of psychic powers come together to fight against what appears to be the inevitable and all-too dangerous future. This is a book you won’t want to put down—even after you finish it!

Check out the fun quiz readers can take to determine which character they are.
It's just 7 questions long and has badges that readers can use to display their results http://www.emlynchand.com/farsighted/quiz/ 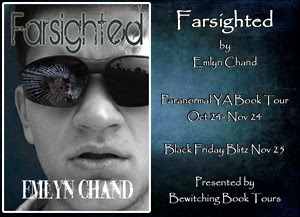