REVIEW - CAUGHT IN THE HAZE BY SANDI VAN 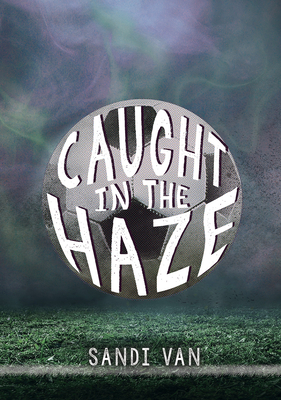 BLURB from Goodreads
Tae has moved twice in his life. First, from South Korea to the United States when he was adopted as a baby, and then to a new town before he starts high school. In Tae's new school, he's one of the youngest players, and the only person of color, trying out for the Varsity soccer team--a team known for its violent hazing practices. Tae wants more than anything to be part of the team, but worries about fitting in. Then, he sees a familiar face. Luke is a soccer star on his way to scoring a role as the team captain and a full ride to college, but no one knows his secret--that he was adopted too. Tae and Luke met in an adoption group years before, and Luke's first instinct is to help Tae fit in. But tradition is tradition, and Luke might not be able to save Tae from being hurt in the hazing rituals without risking his own reputation.

REVIEW
I like the darker coloured cover and how the book title is set within a soccer ball, as it really fits with the content of the book. The genres listed for this book are Sport, Teens & YA and is written in the Hi-Lo style, making it ideal for reluctant readers, or those that struggle a little with reading.

The main character is Tae who is originally from South Korea and was adopted when he was a baby. Tae loves soccer and is a revered and popular player at his current school, so he is worried for his sport playing future, when his parents announce they are moving which means a new school and soccer team. Tae goes from being a big fish in a little pond to being one of the smallest fish in a much larger, in a difficult to navigate pond. Tae decides to try out for the Varsity team however this team is quite notorious for its hazing practices. Tae really wants to be part of the team but worries a lot about being the new guy, being the only person of colour too. Tae initially feels relief when he see’s someone who he knows from years before. Tae and his family, met Luke and his family through the adoption group they all belonged to. Luke is a well-established member of the soccer team but seems to be going hot and cold on Tae. Luke encourages Tae to keep going when the going gets tough during training, but at the same time doesn’t openly show he is an old friend. Luke has worked hard to be part of the team, to be seen as the same as everyone else on the team and doesn’t want the other players to know he was adopted. The hazing rituals are as much part of the soccer team process as the training sessions are. Nicknames are given to each player. The prospective new team members submit to demanding training with the coach and then the extra gruelling drills combined with hazing from the rest of the team too. It’s when a hazing ritual goes horribly wrong that Tae has to make an important decision, keep the team secrets or come clean and possibly face the wrath of the team.

I did really enjoy reading this book. The characters and plot were so believable. The book is written from the alternate point of views of Tae and Luke. This book would be an ideal conversation starter about the practices and dangers of hazing. I think hazing is more of a US practice than a UK one but it still felt a very relevant read. Tae had to do quite a lot of soul searching and assess whether the place on the soccer team was worth all the hassle of the hazings. Tae seems to think on each individual hazing that its ok he can do it, everyone else is. Then comes the next and the next with him thinking he has come this far, so he can’t quit now and that once he gets a place on the team things will be much easier. However, there comes a time, with one particular hazing ritual that has Tae drawing a line.

My immediate thoughts upon finishing reading this book were that I had really enjoyed it. It’s a Hi-Lo style book, that covers sport and the issues surrounding new schools, new soccer teams and fitting in with the crowd. How far will you be pushed into doing things you don’t really want to do to “fit in” before you draw a line and refuse to remain quiet about it all too.

Summing up, the book was a fast read, I read it in just one reading session. I would definitely read more by this author. The main character of the book deals with some important issues throughout this short book.