REVIEW - THE PHARMACIST BY RACHELLE ATALLA 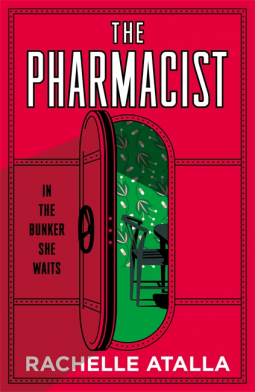 BLURB from Goodreads
THE BUNKER IS DESIGNED TO KEEP THEM ALL SAFE.

In the end, very few people made it to the bunker. Now they wait there for the outside world to heal. Wolfe is one of the lucky ones. She's safe and employed as the bunker's pharmacist, doling out medicine under the watchful eye of their increasingly erratic and paranoid leader.

BUT IS IT THE PLACE OF GREATEST DANGER?

But when the leader starts to ask things of Wolfe, favours she can hardly say no to, it seems her luck is running out. Forming an unlikely alliance with the young Doctor Stirling, her troubled assistant Levitt, and Canavan - a tattooed giant of a man who's purpose in the bunker is a mystery - Wolfe must navigate the powder keg of life underground where one misstep will light the fuse. The walls that keep her safe also have her trapped.

How much more is Wolfe willing to give to stay alive?

REVIEW
I found the cover of this book quite eye catching and it is what initially brought my attention to the book. I love how the bunker door is a capsule shape that also fit with the title of pharmacist too. The byline is “In The Bunker She Waits” matches well with how most of the residents within the bunker feel. They are waiting, “treading water” or just passing time until they can leave the bunker which was initially a saviour for them yet seems to feel more like a prison for most of them. When I saw this book and read the blurb, I thought that it was going to be a post-apocalyptic event but it is more of a speculative, mystery, suspense type thriller. People having to go underground and live in a bunker is something that I think is quite believable when you look around at the things that are going on around the world, so I did find that aspect interesting. It was a shame that the book didn’t look more at the aspects of how Wolfe and the other bunker inhabitants felt leaving family and friends behind.

In the bunker you are referred to by your surname which is quite impersonal and perhaps institutionalised or militarised way of existing/living. The inhabitants of the bunker are fed vitamin and mineral enriched pureed cold food from a sachet. They sleep in dormitories that have beds/bunks attached to the wall to maximise space. The surroundings are grey, concrete and sound quite depressive. The bunker residents are given jobs relevant to what they did in life prior to the bunker. It seems to be a bleak, grey existence for the majority of those living there. Which we learn later in the book is in a sharp contrast to how the leader, Nathan Douglas, who is referred to as N.D. The leader lives in lush, lavish conditions. Thick carpets, antique furniture, elaborate decorations even by “before/outside” standards.

The main character who I was equally captivated, and yet at times frustrated by was, Wolfe. Sarah Wolfe was a pharmacist for the military and was having an affair with a married man. In fact, it was this married man that got her onto the list to ne included in the list of people to go into the bunker. Wolfe is a pharmacist in the Bunker and her job is to dispense medication to the other people in the bunker and make sure they take it/use it in her presence and record it all. Wolfe is talking to Canavan, the male in the bunk above hers about feeling insecure in her job and he says he will see what he can do to help as he knows someone in the bunker. Wolfe is given an assistant, Leavitt. However, there’s a price for this help, she is now in debt to the leader of the bunker N.D and his increasingly odd quirks and behaviours. When Wolfe visits the leader, he gives her a list of names and he demands she report back to him about them. Wolfe becomes emotionally involved with one of the Doctors and the leader eventually uses this man to blackmail Wolfe into doing his bidding. Wolfe faces some really difficult decisions, ones that those around do not understand, that change her life within the bunker for the worst. Wolfe feels guilty about enjoying her time in the luxury of the leader’s quarters and the benefits she has access to when she visits. Wolfe has to report things back to the leader on the people whose names he has given her which makes her feel like she is breaching their privacy and betraying them in a big way, but what can she do, how can she refuse the bunker leader. Wolfe knows times are changing within the bunker, if people really knew how the leader was living in comparison to their own monotonous, grey existence, there would be even more trouble.

The book is really difficult to describe without going into detail and then giving away too many details and spoiler. I enjoyed reading the book, but it is quite complicated, strange and at times a little weird. It really wasn’t what I thought it was going to be like, the story progression, and ending were not at all what I expected. Don’t let my explanation of the book put you off, but be prepared for it to not be quite what you may be expecting.

This book was really difficult to give a star rating to. I enjoyed it and felt it was more than a 3 star read but yet I felt indecisive about giving it a 4. After a lot of mulling over I decided on a 4 star rating. I did enjoy the book, though I felt like the leader/those that created the bunker were kind of treating it like an experiment. I would have really loved more about the “before they went in the bunker” and/or “those entering the bunker” before they went into the bunker. I also was left feeling that I wanted to know more about the bunker rules, how it was set up and what people were told when they were chosen to enter it. I guess I’m saying this felt like only part of the story, almost as though this was the second book in the story.

Summing up, I enjoyed reading the book, even though its plot didn’t take the route I was initially expecting it to.