BLOG TOUR - OUT OF HER DEPTH BY LIZZY BARBER

Lizzy Barber’s debut A Girl Named Anna won the Daily Mail First Novel Competition. In her newest and even more unputdownable work, she weaves a clever and deadly web of manipulation and desire. A summer thriller rife with back-stabbing, bed-hopping, and murder, Out of Her Depth is a perfect escapist read for fans of Euphoria, J.T. Ellison’s Her Dark Lies, or Rachel Hawkins’s Reckless Girls. 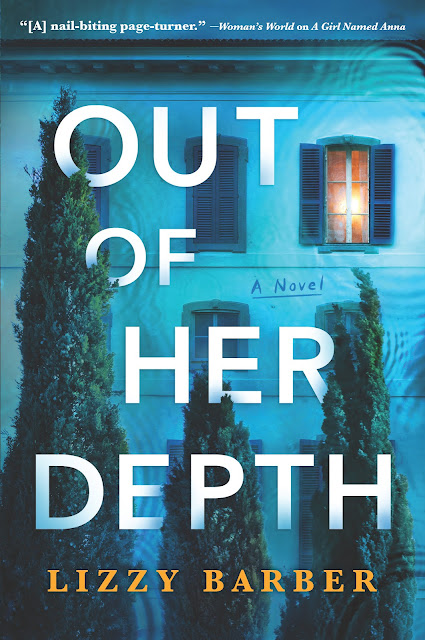 BLURB supplied by Harlequin Trade Publishing
Rachel lands her dream summer job at a luxurious Tuscan villa. She’s quickly drawn into a new group of rich and beautiful sophisticates and their world of partying, toxic relationships, and even more toxic substances. They’ve never faced consequences, are used to getting everything. But then someone goes too far. Someone dies. And nothing will ever be the same.

Before you judge me, remember this: a girl died, but it wasn’t my fault.

I know that seems like a pathetic confessional. Even more pathetic because the confession itself has, until this point, never been uttered.

The words have formed themselves on the precipice of my tongue, palpitating with their ugly need to be heard, to make me part of the narrative. To declare to the A-level students when I see it coming up on their news feeds, languorously debating it, now, once more, as it has risen into public con­sciousness twenty-one years after the fact: I was there.

When they stumble in late to my lesson, less eager to talk of the trapassato prossimo than about who fucked whom at last night’s social, and whether crimped hair really is making a comeback.

When they blink at me from faces still etched with yes­terday’s makeup, reeking of the top-shelf vodka and menthol cigarettes that their house mistresses will studiously ignore.

When they declare they “really struggled with this week’s essay” so they only have notes, and they say, “About that C on the mock exam… Did you know my parents funded the library?” and they don’t even bother to wait for the response as they pull out their laptops and glance at their watches, and they think to themselves, Boring bitch has never lived.

I imagine each letter incubating in the saliva that pools in the side of my gums. I picture myself standing, drawing the blinds. An illicit eyebrow raise that will make them pause, look up at me anew, place their laptops on the floor as I edge toward them.

Screw Dante. Let me tell you a real story about Florence.

***
Now
I am just leaving for dinner when I hear.

People talk of remembering exactly where they were when great events happened: Princess Di, the Twin Towers, Trump. I know this isn’t quite on the same scale, but I’ll remember exactly where I was, all the same.

I’ve had back-to-back lessons all day, but now, at last, I have an hour to myself, the only person left in the languages office. I spend it working on my paper “Pirandello and the Search for Truth” for the Modern Language Review, barely coming up for air. This is the part of academia I enjoy the most: the research, the pulling together of an idea, the rearranging of words and thoughts on the page until they start to take on a life of their own, form arguments, cohesion. I’m hoping that this will be the one they’ll finally agree to publish.

I am the only French and Italian teacher at Graybridge Hall,

have been for the last ten years. When they decided to intro­duce Italian for the younger years, as well as the older stu­dents, I did suggest that perhaps now it would be time to look at hiring someone else. But Ms. Graybridge, the eponymous head—and third of that name to have held the position—re­minded me that the school’s ethos was “personal and contin­uous care for every girl.” Which didn’t really make sense as a rebuttal, but which I knew was shorthand for no, and which she knew—because of certain circumstances under which I as­sumed my position in the first place—I wouldn’t argue with.

Not that I don’t enjoy teaching. Sometimes. “shaping young minds” and all that seems like it should be a worthy cause. When I was younger, much younger, I imagined maybe I would do a PhD, become a professor. I also thought about diplomatic service, traveling the world as a translator, jour­nalism, maybe, why not? Instead I sit through mock orals on topics as ground-breaking as Food and Eating Out, Cinema and TV, and My Family.

My rumbling stomach is the first signal I have that eve­ning is approaching, and when I tear myself away from my laptop screen to look at the darkening sky, I decide to ditch my planned root around in the fridge, and be sociable instead. Wednesday is quiz night at the pub near school. A group of teachers go every week, the little thrill they get as their ce­rebral cortexes light up with a correct answer just about mak­ing up for a day spent asking the girls to kindly not look at their Apple Watches until break, and maybe not take their makeup out of their Marc Jacobs backpacks until class is over just this once.

I close down my laptop and do a brisk tidy of the room be­fore slipping on my coat and scarf, and am just about to slide my phone into my rucksack when an alert catches my eye—specifically, a name, bouncing out of the BBC News push no­tification, one I have avoided all thought of for a long while, as much out of circumstance as necessity.

I freeze in the doorway—phone clutched in my hand as pre­ciously as though it were the Rosetta stone—and look again, not quite believing I saw it right, presuming perhaps it was just wishful thinking, a long hour of screen-staring playing tricks on my eyes, that could have conjured his name before me.

But there it is. That name. Those five syllables. The six vowels and seven consonants that have held more significance for me than any word or sentence written in my entire at­tempted academic career.

And next to them, three words that throw my whole world off kilter, that see me reaching for the door handle and wrenching it shut, all thoughts of dinner gone from my mind:


I sit at my desk, lights off, face illuminated by the white glow of my phone screen, and read someone else’s report of the story I know so well. The story I have lived. I place the phone facedown on the desk, snuffing out its light, and press my palms into the woodwork. The feel of my flesh rubbing against the desk’s smooth surface grounds me, helps me pro­cess the report—think.

I knew there had been requests for appeals over the years, all denied by the Corte d’Assise d’Appello. A change of law­yer, probably hoping that new eyes on the case could find something that was missed. But they’ve all come to nothing. How did I miss this?

If he is retried, if there is any possibility that he might be released…everything would change.

After the initial trial, after my part was done and I could finally go home and resume the life I had worked so hard to live. I tried—I really, truly tried—to put it behind me.

That was what she did, after all, and I wanted to follow her lead. I have always wanted to follow her lead. But that time has never truly left me. Sometimes, it will take the smallest thing—the light filtering through a window just so, a partic­ular kind of humid heat, walking past a patisserie and being hit with a waft of baked vanilla sweetness—and it all comes back to me with cut-glass clarity. The sound of our laughter ricocheting off ocher-colored walls. The clink of glasses and the taste of hot weather, raw red wine. The touch of sweat-dewed skin. The scent of pine. The giddy, delightful feeling of being young and happy and having the rest of our lives spooling out in front of us.

These are the good things—the things I want to remember.

The bad things…those I have no choice but to remember.

And now, at the sight of his name alone, I am instantly transported: flying on the wings of a deep déjà vu, away from the cold late-autumn day and the dusty corners of my tired office and back, back, back to that time—that summer.

To those gold-tinged days and months that crescendoed so spectacularly into those final, onyx hours.

To the start.
ABOUT THE AUTHOR 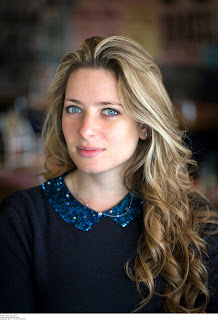