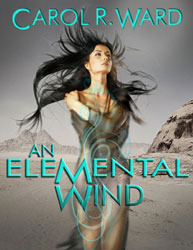 What is your name, where were you born and where do you live now?
My name is Carol Ward. I was born in Alliston, but have lived most of my life in Cobourg, Ontario.

Did you always want to be a writer? If not what did you want to be?
Although I’ve always written, originally I wanted to be an artist. I still have a folder of some of my old sketches hidden away somewhere.

When did you first consider yourself as a "writer"?
When I saw the cover of my book. I looked at it and there was my name, and I thought, “Wow, I really am an author now!”

Do you work another job as well as your writing work?
I have my own business that offers various writing and editing services, as well as audio recording services and virtual office.

What is the name of your latest book, and if you had to summarise it in less than 20 words what would you say?
My latest book is An Elemental Wind and it can be summed up as: A woman with special abilities is on a dangerous mission and finds help, and love, where she least expects it.

How long does it usually take you to write a book, from the original idea to finishing writing it?
The actual writing of this book took about a year, but that’s because I was writing one chapter a week and posting it on my blog. The editing process took about six weeks.

Do you have plans for a new book? Is this book part of a series?
I’m hoping to have a science fiction/adventure ready to go by Christmas, and the next Elemental book will probably be available in the spring. An Elemental Wind is the first of five in the Ardraci Elementals series. The second, Fire, is currently being serialized in draft form on my blog.

What genre would you place your books into?
My genre is science fiction/adventure/fantasy/romance/paranormal or any combination of the five. I never try to limit myself to a particular genre when I write, I just let the story come.

How long have you been writing?, and who or what inspired you to write?
I think I was born with a pen in my hand. I wrote all through school, mostly poetry and short stories. In grade 8 I had a teacher who encouraged creativity, and in highschool I was the geek who took two different English classes just so I could write more.

Where do you get your book plot ideas from?
Where don’t I get ideas from? I have folders and files and notepads filled with ideas. Sometimes it’s a character name that pops into my head and demands a story, more often it’s a case of “what-iffing”. What if acid rain really was acid? What if animals were just biding their time until they rebelled, and the way we treat them would have a bearing on how they treat us? What if you stumbled on a door to a parallel universe, would you go through it?

Do you gift books to readers to do reviews?
Yes, of course!

Do you read all the reviews of your book/books?
Yes, because feedback is important to me as a writer.

How do you come up with the Title and Cover Designs for your book/books?Who designed the Cover of your books?
I have an amazing cover artist named Heidi Sutherlin, from <a href=http://mycreativepursuits.com/index.html>Creative Pursuits</a>. She somehow tapped into my subconscious and pulled out the perfect image for my main character. And she was dead on with the landscape from the planet they end up on as well.

Have you ever suffered from a "writer's block"? What did you do to get past the "block"?
I don’t have time for writer’s block, seriously! I’ve got too much on the go. I’m usually working on two or three projects at a time, so when interest flags in one, I move on to the next.

Have you ever based characters on people you know or based events on things that have happened to you?
No, my friends and family are pretty safe . . . or maybe they’re just boring. LOL I did, however, base a story idea on an event that happened to me. I was driving along the highway, in the fog, and suddenly had the idea: What if this wasn’t really a fog, but something else altogether? Just that one thought has generated a series of three books (unpublished so far).

Is there a certain Author that influenced you in writing?
Charles de Lint. He’s a Canadian author and the grand master of Urban Fantasy. At one time I wanted to write like him, but now I’d much rather have someone feel about my books the way I feel about his.

Which format of book do you prefer, ebook, hardback, or paperback?
All of them! I have a massive collection of paperbacks and probably almost as many hardbacks. Shelf space is at a premium in my house. Then a wonderful friend gave me a Kindle and I’m slowly building up a second library on it. While I love the convenience of the e-reader, I would never give up print books.

What is your favourite book and Why?  Have you read it more than once?
Picking just one favourite is difficult . . . I guess I’d have to go with Terry Windling’s The Woodwife, because it’s the book I’ve read the most often. It’s an urban fantasy about a woman writer/poet who inherits a cabin up in the Rincon Mountains of Arizona. While she investigates the mysterious death of it’s previous owner, she discovers a whole world that co-exists with ours. I love it for its rich, tapestry of images, its characters, and the way that myths and legends of different cultures are woven together.

Do you think books transfer to movies well? Which is you favourite/worst  book to movie transfer?
I used to think that books were always better, but in the case of Eat, Pray, Love I would say the opposite is true. The movie was not nearly as boring as parts of the book. Two movies spring to mind as the worst book to movie transfer: Mysterious Island, by Jules Verne (I loved the book as a kid and was appalled by the movie) and Dreamcatcher, by Stephen King (the movie was really, really, bad).

Do you think ebooks will ever totally replace printed books?
Not for a true book lover. Ebooks are convenient, but there’s nothing like sitting curled up in a chair on a cold winter’s night with a good book in your hands. And actually, I’ve read a couple of books on my kindle that I’ve enjoyed so much I’m looking to buy them in a print format.

Do you think children at schools these days are encouraged enough to read? and/or do Imaginative writing?
I think there are more programs in place that encourage creativity than there were when I was in school (which was a long time ago). I’m taking part in a poetry seminar my poetry group is offering some local highschool students and we certainly didn’t have anything like that. As far as reading goes . . . I don’t think it should be just up to the schools to encourage children to read. You need to read to your child, even when it’s a baby, to instil the love of words in them.

Are there any New Authors you are interested in for us to watch out for? and Why should we watch out for them?
Heidi Sutherlin. Her book, Brothers in Betrayal, should be out in time for Christmas. I’ve been editing it and it really took me by surprise how great it is. It’s really not fair that such a talented artist should be such a talented writer as well!

What piece of advice would you give to a new writer?
Write. Read. Repeat as necessary. Just don’t give up.

And any other information you wish to supply?
I currently have two serials, in draft form, I post to on a weekly basis. Each Wednesday there’s a new chapter of Shades of Errol Flynn, a swords and sorcery fantasy, on Random Writings, and each Friday there’s a new instalment of Fire, the second in the Ardraci Elementals series, on Random Thoughts.

Thankyou for taking the time t take part in this interview, I look forward to reading your book.
Posted by Jeanz xx at 15:00