HOW TO TRAVEL THE WORLD FOR FREE BY MICHAEL WIGGE 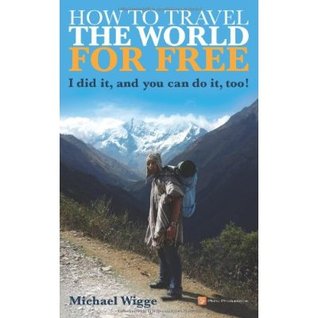 
BLURB from Goodreads
How to Travel the World for Free The unbelievable feat of traveling 25,000 miles—from Berlin to Antarctica—without any money! Join Michael Wigge as he immerses himself into fascinating subcultures, rides with Amish farmers in old-fashioned buggies, sleeps on the street with the homeless, and, with the help from alternative lifestylers, learns to nourish himself with flowers. Wigge had only 3 concerns during his travels: How do I get some food? How will I get to my next destination? Where can I sleep? …all without money! This unusual travel diary combines adventure with humour and contains surprising revelations about when money is really needed—and when it’s not. A must-read for every travel and adventure fan!


MY REVIEW
Firstly I will say I like the cover and think it depicts the book really well, as it shows Michael Wigge in his now rather shabby dirty clothing, looking rather downtrodden and tired,trying to hitch hike at the side of the road. What a contrast between how Michael looks and the beautiful scenery around him looks!
Initially when I read what Michael planned to do I admit I was sceptical. I mean how on earth was he going to get total strangers to give him food, shelter and money?
Well he did it! He did it on numerous occasions and in numerous cities. Was he ever in danger? Yes at times it seemed he was but just as you fear the worst someone would take pity on him ad take him in for the night or feed him. Was he ever tempted to give up? Yeah he explains in the book he has a few wobbles where he felt like giving up, but he always managed to push the doubts aside and continue his unique journey.
Michael met many different types of people, those that had plenty, that he would do odd jobs like being a butler for the day for, to the simpler life-styled Amish people who took him in when he was at a low ebb and allowed him to rest up and be fed. The Amish then paid him for working with them and gave him a bike which allowed his journey to continue on at a faster pace for a while. Michael then manages to sell the bike and use the money to continue his journey.
Michael does some crazy, wacky things such as being a human sofa! Charging a dollar to be sat on! I really loved the pay a dollar for a pillow fight escapade. Especially when he gets wise and charges some students to fight each other with the pillows whilst he looks on resting and enjoying the show they are putting on.
It always seemed to be the people who had the least seemed to be the ones that gave the greater amounts and most willingly.

One of the great things about this book is that lots of people will love reading it. I mean you don't need to be a big reader to enjoy it. Its the type of book you can dip in and out of. It doesn't need to be read as a whole if you don't want to. Its very easy to slip in an out of. An ideal book to have in your bag when travelling on a boring journey somewhere.
So did I enjoy this book? Yes Would I read more by Michael Wigge? Yes if it were some similar strange journey he was trying to do. In fact I would love for him to travel from the highest tip in Scotland to our Lands End in Cornwall and see if he could do that with no money! Would I recommend this book? Yes, its a great, light,educational yet amusing book. I would have loved to watch the TV series that aired in America.

(This book was sent to me to review by Megan at PRbythebook, so thankyou! )


Available from Amazon.co.uk
Posted by Jeanz xx at 09:00