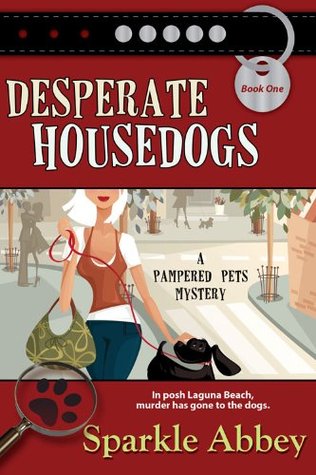 
BLURB from Goodreads
When Caro Lamont, former psychologist turned pet therapist makes a house call to help Kevin Blackstone with his two misbehaving German Shepherd dogs, she expects frantic dogs, she expects a frantic dog owner, she even expects frantic neighbors. What she doesn’t expect is that two hours later the police will find Kevin dead, his dogs impounded; and that as the last person to see Kevin alive (well, except for the killer) she is suddenly a person of interest, at least according to Homicide Detective Judd Malone.

Sparkle Abbey is the pseudonym of two mystery authors (Mary Lee Woods and Anita Carter). They are friends and neighbors as well as co-writers of the Pampered Pets Mystery Series. The pen name was created by combining the names of their rescue pets - Sparkle (Mary Lee’s cat) and Abbey (Anita’s dog). They reside in central Iowa, but if they could write anywhere, you would find them on the beach with their laptops and depending on the time of day either an iced tea or a margarita.)

MY REVIEW
I downloaded Desperate Housedogs and Get fluffy as an omnibus edition but have chosen to review them on two separate posts.
I love the dog themed cover with the paw-print and magnifying glass, to signify how Caroline ends up being an animal detective crossed with her “normal job” as a pet psychologist. The cover also gives you the chick lit feel of the book too.
The book itself is well written and holds your attention at all times whilst reading it too. I love the feud between Caroline and Melinda over Grandma Tillies brooch. I get the impression that Grandma Tillie knew exactly what she was doing when she left the rather ugly brooch to “her favourite grand-daughter”. The feud kind of keeps Melinda and Caroline in touch with each other and well and truly keeps them within each other’s lives.
This book is fairly fast paced there’s always something going on. I like the characters within the book, the “posh” people from the gated community, and their pampered animals.
Caroline and ~Melinda are cousins but their characters are so similar they could be siblings. They both have a “tell it like it is attitude”, both work with animals, both are ex-beauty pageant queens, and both value their families. Though Caroline and Melinda have this ongoing feud on who should have possession of the monstrosity that is the brooch, they would be the first at the other side in times of need or danger.
So did I enjoy the book? Yes Would I read more of this series? Definitely am reading Get Fluffy next! Would I read more by the Authors? Yes loving their writing. And finally Would I recommend this book? Yes!