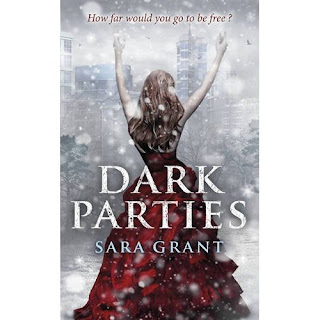 
BLURB from Goodreads
Sixteen-year-old Neva has been trapped since birth. She was born and raised under the Protectosphere, in an isolated nation ruled by fear, lies, and xenophobia. A shield "protects" them from the outside world, but also locks the citizens inside. But there's nothing left on the outside, ever since the world collapsed from violent warfare. Or so the government says... Neva and her best friend Sanna believe the government is lying and stage a "dark party" to recruit members for their underground rebellion. But as Neva begins to uncover the truth, she realizes she must question everything she's ever known, including the people she loves the most.


MY REVIEW
Once again my daughter, Rachel was responsible for nagging me to read this particular book next, she wanted to know my opinion on the book as she has already read it, her review is here. We were kindly sent this book for review by Sara Grant.

I really enjoyed reading this book, its genre dystopian is my favourite genre. This book reminded me a little of Delirium by Lauren Oliver. The whole plot of the government controlling the people and telling lies to cover the fact of people not conforming to rules. there's a rather complicated double love triangle in this book with Sanna and Neva liking and being liked by Braydon, as well as Braydon and Ethan liking and being liked by Neva. I loved reading about Neva and her grandmother, the fact they could and would talk about anything. The grandmother reminded me of the grandfather from Matched by Ally Condie, the way they both quietly realise the government is wrong and is telling lies to cover things up.
There are lots of twist and turns within this plot who can Neva trust? Braydon? her mother? Sanna? or even her own father? Then there are the most unlikely people who are working for the resistance, I won't name any names as that would spoil your enjoyment of the book. I really love this genre of book, it has dystopia, government issues, "underground"resistance, complicated relationships and coming of age issues and dramas too. This book is written so well it flows really well, and keeps you involved and inquisitive right to the very conclusion. If there is a moral attached to this book, it could be best friends are friends through good or bad times, like Sanna and Neva, even though they have a serious argument they are still there in the others time of need. They would literally risk their lives for each other. Neva also find certain things out about her parents, they really not who they seem to be on the surface. The adults are as trapped in the "system" within the Protectosphere as the younger people are. what may have started out as perhaps a game or an excuse for a party with Neva, Sanna and their friends quickly turn serious about the rebellion and that dark party night changes lives and peoples destinies forever.
Did I enjoy the book? YES Would I read more by Sara Grant? YES Would I read a sequel to Dark Parties? Definitely Would I recommend? OH YES!

Available from Amazon.co.uk
Posted by Jeanz xx at 03:00