BLURB from Goodreads
When Caro Lamont, former psychologist turned pet therapist makes a house call to help Kevin Blackstone with his two misbehaving German Shepherd dogs, she expects frantic dogs, she expects a frantic dog owner, she even expects frantic neighbors. What she doesn’t expect is that two hours later the police will find Kevin dead, his dogs impounded; and that as the last person to see Kevin alive (well, except for the killer) she is suddenly a person of interest, at least according to Homicide Detective Judd Malone.Sparkle Abbey is the pseudonym of two mystery authors (Mary Lee Woods and Anita Carter). They are friends and neighbors as well as co-writers of the Pampered Pets Mystery Series. The pen name was created by combining the names of their rescue pets - Sparkle (Mary Lee’s cat) and Abbey (Anita’s dog). They reside in central Iowa, but if they could write anywhere, you would find them on the beach with their laptops and depending on the time of day either an iced tea or a margarita.) 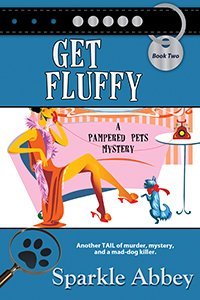 BLURB from Goodreads
Disgraced Texas beauty queen, Melinda (Mel) Langston, owns Laguna Beach’s Bow Wow Boutique. Mona Michaels, Mel’s most despised client, owns a star dog, Fluffy, who's worth millions. When Mona is found whacked in the head with Fluffy’s Daytime Emmy, everyone wants Fluffy. And someone won't stop at murder to get the pooch.Secrets. Blackmail. Mel tackles the case like a dog with a bone. But can she dig up the truth before the killer buries her?


Take a look at the Authors Amazon.co.uk page

FUTURE Books In The Series
(information from the Authors Website)

When Caro's friend and neighbor, Kitty Bardot, is found gunned down on Pacific Coast Highway just minutes after leaving a star-studded holiday party at the posh Laguna Montage, the police are stumped.  The popular Hollywood publicist was well-loved by not only her clients but everyone in the art community and the police seem ready to call Kitty a road rage casualty. But when Laguna art patrons begin contacting Caro with catty tidbits of information that hint at a scandal in Kitty's past, Caro is determined to get to the bottom of who shot Kitty.

Laguna Beach's top plastic surgeon, Jack O'Doggle drops dead in front of the Mel’s shop the Bow Wow Boutique. The last person to see him alive was his blind date and Mel’s best friend…Darby. Mel and Darby put their amateur sleuth skills to the test once again as they expose the doctor's double life as a drag queen named “Jackie O” and the long list of performers who wanted top billing.