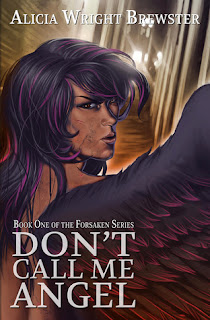 
BLURB from Goodreads
After crawling her way out of Hell, Six is ready to cast aside her angel wings and all the responsibilities that come with them. But Earth is not as peaceful as she imagined it. Demons, dark angels, and other hell-beasties escaped before her, and they're not as content as she is to live a quiet life on Earth.A fellow angel who escaped Hell with her commits a series of soul-murders, destroying human souls so they can't go to the afterlife. Although Six has conflicting feelings about humans, she goes after the other angel to keep their escape a secret from the one she fears most.

I was sent an e-copy of this novella by Dragonfairy Press and managed to squeeze it in as it was quite a short read.
Firstly I don't normally go for what I call "comic style" but my daughter tells me the correct terminology is that its a "graphic novel" style but I really enjoyed this one. There was the occasional illustration within the book as I read it on my kindle. I really liked the illustrations quite a lot. Obviously the paperback would use more images within and I am not sure I would have enjoyed that as much as I have the kindle version. I also like the cover of the book, pictured above. the creature on the front of the book is Six, a fallen angel with beautiful purple wings and purple streaks in her hair too.
Six is a strong female character which is always good! She has attitude and stands up for what she wants. When she realize's what her fellow Hell escapee is doing she knows she has to end it before it goes any further. Even though Alden is stronger and has the advantage of still having his wings, Six bravely takes on the task of stopping him stealing souls.
I won't go further into the plot, this novella was enjoyable on its own but would be better as part of a larger story/series. the other books could be prior or after Six and Alden's escape from the dark, depths of hell. The novella is written in a way that keeps you interested as to what is going to happen next it also has some twists and surprises in it right up to the very end of it.
So did I enjoy it? Yes. Would I read more by Alicia Wright Brewster? Yes. If this book was a Series would you read more? Probably yes, Would I recommend? To mature teens and adults, and those who love this style of book yes.