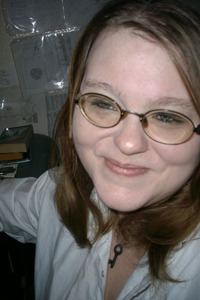 My name is Marion Sipe, and I was born in St. Petersburg, Florida, but now live in New Orleans, which I adore.  It's a wonderful city, full of so much life.  It's got everything, and I'm so glad to finally be back home.

Did you always want to be a writer?

Oh, yeah, pretty much always.  I can vaguely remember being unsure, thinking maybe I'd be a veterinarian or a lawyer, but writing drew me in pretty early and I've loved it for so long I can't really say when I made the decision.

What is the name of your latest book, and if you had to summarize it in less than 20 words what would you say?

The title is Getting Ahead, and… Wow, just 20 words, huh?  Hmmm…  I think: "While hunting a serial killer during a political event, detectives Nick and Renee realize that isn't their only problem."  There's so much going on, and it's hard to wrap it all up in so few words, but I think that gives the gist of the story.  *nods* 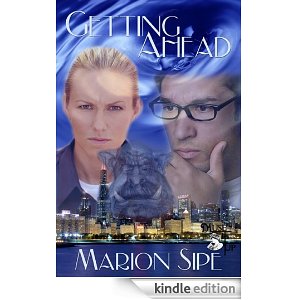 BLURB from Goodreads
When Detective Nick D'Artori arrives at the scene of the Troll-Killer of Portal Park’s latest attack, he knows his night isn't going to be boring. Finding the Troll-Killer's victim alive—if missing one of his two heads—seems like a stroke of much needed good luck. But why would the victim, a royal guard, have wandered away from his duty? And was it only coincidence that the Troll-Killer happened to target him? The inconsistencies lead Nick and his partner, Renee Arbors, down a new road of investigation, but they’ll have to negotiate it while foiling mad bombers, car-jackers and trollish magic.

Who is your publisher? Or do you self publish?

Both, actually.  This novella was put out by MuseItUp publishing, but I also self-publish.  I think it's important to come at a thing from a bunch of different angles and find the solution that best fits a given project or goal.

They all have their challenges, really.  Every book has its own snags and frustrations, as well as its own joys and really fun bits.  With Getting Ahead, I think the main challenge was that it had a lot of growing pains.  I originally intended it to be a short story, but no matter how hard I tried it refused to fit in any workable short format.  It took me a while to accept that it wanted to be a novella.

What made you decide to write that genre of book?

Getting Ahead is very much urban fantasy, despite its lack of vampires or werewolves.  It has trolls, gnomes, and centaurs instead.  While the lines of that genre are currently being debated (does an urban fantasy have to be set in a city?  Does is have to be contemporary?  All the usual stuff), this novella does have a very urban feel and aesthetic.  Of course, it's also got bits of mystery and police procedural in there, and a touch of the noir, I think.

What can we expect from you in the future?  More books of the same genre? Books of a different genre?

Oh, definitely more books!  Genre's another matter.  I don't really stick to just one, although urban fantasy is a favorite of mine.  I also love epic fantasy, political fantasy, horror, and science fiction, with a touch of mystery, sometimes a little romance… Basically?  I could and will write anything.  For me, genre is really a product of the story that wants to be told.

Do you choose a title first, or write the book then choose the title?

It's different with every story.  With Getting Ahead, the title and the plot came simultaneously, because the title is actually a pun on the story line.  You see, there's this serial killer running around shooting trolls and taking their heads as trophies, but some trolls are two headed, so Nick finds that the latest victim is still alive, but missing one of his two heads, and this leads to a bunch of new clues as to who the serial killer might be.

Do you decide on character traits (i.e. shy, quiet, tomboy girl) before writing the whole book or as you go along?

Both.  *nods*  I have a good idea of who the characters are, of what they're like and how I see them, but they also evolve in the writing.  Sometimes the changes are small, and sometimes they come out completely differently from how I'd intended them, but there's always something.

Do you basic plot/plan for your book, before you actually begin writing it out? Or do you let the writing flow and see where it takes the story?

Again, both!  :-D  I generally plot everything out, but it can change a lot in the writing.  Sometimes the characters change the plot, sometimes the setting does, and sometimes it just starts heading down a road I hadn't thought of while planning and I… follow along!  I think that, if there weren't any surprises for me while writing, I wouldn't enjoy it as much as I do.  At the same time, I have to have a plan when I start or I won't be able to get the words moving at all.

What do you do to unwind and relax?  Do you have a hobby?

Writing?  No, seriously, I write as a hobby, too.  Little fun stories that are never meant for publication and I can just enjoy.  I like to read, as well, as I think most writers do.  I enjoy drawing a lot, and painting when I can.  I don't get a lot of free time, these days, but when I do I'm generally reading or drawing.

What is your favourite book and why?  Have you read it more than once?

Just one?  Eep!  Totally unfair.  Okay… Hmm… I'd have to say my favorite book at the moment (it changes) is Lavinia by Ursula LeGuin.  I've just read it, you see, so it's fresh in my mind and all the reasons I loved it are right on top.  *nods*  She's a spectacular writer anyway, so it's no surprise I loved the story.  It imagines early-Roman times in a way that really resonates with me, and I loved Lavinia's character voice.  It was so well written, distinctive, and beautifully presented to the reader.  I found myself thinking in the same rhythm as the character speaks after a reading marathon, and that's always an excellent sign for me!

What are you currently reading? Are you enjoying it? What format is it? (ebook, hardback or paperback)

I'm actually currently reading critical essays on Emily Dickinson and her poetry.  I tend to alternate between fiction and nonfiction, and I just finished Lavinia, so it's nonfiction time.  Although my next planned fiction read is Sharon Shinn's Troubled Waters, which looks really excellent.  And yes, I'm enjoying the critical essays. There's some wonderful thought in them and I always love that!

Commercially?  Eventually.  In our hearts?  Not a chance.  Electronic media is convenient, portable, ecologically sound, saves a ton of space and time, and has a lot of wonderful features.  But having that paper book to hold and turning the pages by hand… There's just something special about that.

Did you read a lot at school and write lots of stories or is being a writer something newer in your life?

One of my first memories of school was our teacher asking us to write a story, to practice our handwriting.  I remember that I was still using that paper with the really big lines that had a dotted line down the center, you know?  The kind that's made so little kids can figure out how tall letters are supposed to be, relative to each other?  I wanted to write a ghost story, but I couldn't figure out how to spell some of the words, so I drew little pictures instead.  There was a gravestone with the word 'yard' written after it (for 'graveyard'), and a little ghost with a dialogue bubble that said "Boo!  Boo!  Boo to you!"  I've been writing ever since, in one form or another.

Did you have a favourite author as a child?

I can't choose just one.  I have to have two, because Roald Dahl and Madeleine L'Engle have equal place in my heart, from different times.  I loved Charlie and the Chocolate Factory, and BFG, and Matilda, but I also adored A Wrinkle in Time and The Swiftly Tilting Planet.  Gorgeous books.  *nods*

Do you have a favourite genre of book?

Fantasy.  Hands down.  I love other genres, a good mystery will always make me happy, and I love some horror to itty bitty bits, and there's so much wonderful science fiction (speculative rocks!), but fantasy has always been my favorite.  I love the myth and legend, the sense of awe and wonder, and exploring a world that can be so very different from our own.

Is there a book you know you will never read? Or one you tried to read but just couldn't finish?

Gardens of the Moon by Steven Erikson.  It has wonderful things in it, but it just doesn't fit with me.  I spent a long time trying to read it and I got pretty far, but the narrative just didn't speak to me.  It actually makes me sad because I've heard that the other books in the series are especially wonderful, but sometimes, as much as you may really want to be into a book, you aren't.

Chrystalla Thoma, no doubt.  I love her stories!  She's poetic, but gritty, addresses really interesting themes and concepts, and I love the speculative elements she uses.  In her Chronicles of Elei, she's imagined a world in which parasites and humanity have some really interesting symbiosis going on, to the point where some parasites actually change their hosts and… Well, it's wonderfully done and a joy to read!

If you could invite three favourite writers to dinner, who would you invite and enjoy chatting with?

Again with the limiting numbers!  :-D  Okay, okay… Ursula LeGuin, most definitely.  Not only is she a brilliant writer, but she's a brilliant thinker as well.  I'd love to have dinner with her.  Also, I think Tanya Huff would be a total kick to have dinner with.  She writes such quirky, interesting characters and she's so good at humor—which I am sadly not—and I think that would make for fun dinner conversation.  Lastly, I think Neil Gaiman would be great fun as a dinner companion.  His books are smart and well written, fun and often thoughtful.  Plus, if all else fails, we can chat about Doctor Who! :-D  I'd add Chrystalla Thoma to that list, but as soon as I can get to Cyprus, I will be having dinner with her.  So, not terribly speculative.  *nods*

I write a blog called Visions and Revisions, which is mostly about my books, writing and worldbuiding (my passion!).  I'm also on Facebook, Goodreads and Twitter, all as Marion Sipe.  I'll include the links: