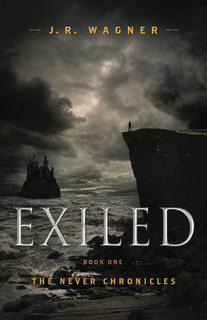 
BLURB from Goodreads
James has never known an ordinary life. As long as he can remember, he and his family have been on the run—moving from place to place, never settling down, never growing roots. Now, just when he’s on the brink of manhood, the very thing his family has been trying to prevent tears him from all he has ever known and thrusts him into a place where he is powerless and alone. Bent on finding a way back, James must brave a place reserved for the worst of his kind. He quickly learns that the land itself poses a greater threat than its inhabitants and if he is to have any chance of returning, he must work with the very people he’s been raised to fear.James has known magic since just after he was born. As a sorcerer, his skills are exceptional yet when he wakes in The Never, his abilities are gone. Armed with nothing but determination and the will to survive, he braves a land wrought with dangers, mysteries and temptations meant to ensnare both body and mind and prevent escape forever.

I did initially find this book difficult to get in to. I then finally got into the story only for the book to switch to a different time and place. The book was from James's point of view in The Never, then also telling his story from when he was younger, and also his parents story, so it had three perspectives which at times was a little confusing. I felt that I would just get into one perspective and then it would immediately jump to another perspective. this book is definitely not a light read, it has an involved and somewhat complex plot. I think it was made a little more difficult by the fact that James and his dad had exactly the same name.Having said all that by the end of the book I had grasped the plot and was liking what I was reading. I understand the climax at the ending that leaves us anxious to read BK2 but I also felt disappointment because I felt I was finally immersed in the plot and story only to have it pulled away from me at the very end. You would probably think that from my remarks that I did not enjoy the book and would not be interested in Bk2 , but you are so wrong I really do want to read Bk2 to find out what happens next. I usually can read anywhere, with/without music or a TV on etc but with this book I did need peace and quiet to fully take in what I was reading. I found that I rose to the challenge of the book and ended up feeling that I actually did enjoy it as much as I would have a light fluffy read. In fact even more so this may sound strange but I felt I had accomplished something by reading it! The relationships between the characters is complicated, and so is the plot, but that makes the book all the more interesting.
So did I enjoy the book? Once I got into it yes, Would I recommend it? To a serious reader who likes a deeper/heavier read yes, Would I read Bk2/more by J.R. Wagner? Yes please.