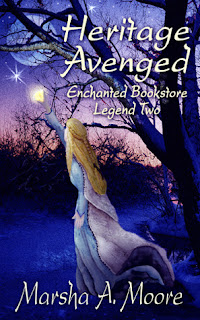 From Chapter 1: The Letter

Lyra worried about Cullen on his flight home. Despite the fact he was over two hundred years old, it was only his second plane trip. The few wizards of Dragonspeir who visited the real world seldom traveled far, and then not conventionally. He kept her safe in his world last summer. She intended to keep him safe in hers.
“Next!” the heavyset postmistress belted out.
“I’ve got to hang up,” Lyra quickly whispered into her cell phone. “Be sure you call me when you land in Sault Saint Marie. Love you.”
She sighed and maneuvered to the clerk at the far end of the counter. If only they could live together in one world. She needed to learn more magic first and hoped to make a start in a few weeks, when she took her winter break from teaching to attend his Solstice Festival. Unfortunately, her formal lessons would have to wait until next summer.
When Lyra approached the counter, the woman peered over the top of her reading glasses as she shuffled papers. “Yes?”
“I’m here to pick up my mail from a vacation hold.”
“Theme of my day,” the postmistress muttered and then barked, “Name and ID.”
“Adalyra McCauley. Just since the day before Thanksgiving.” She fumbled in her purse and pulled the driver’s license from her billfold.
The women sighed, slid off her stool, and shuffled into a back room. A few minutes later, she lumbered back, carrying a small stack of letters, glossy ads, and magazines. She scooted the mail across the counter.
Lyra stuffed it all into a tote bag, then scurried to her silver Subaru sport wagon and tossed it into the passenger seat. Driving Cullen to the Tampa International airport and this stop barely left enough time to make it to the university in time to teach her ten o’clock class. But the memory of those lingering goodbye kisses made it worth the consequences.
She stopped for a red light at a twelve-lane interchange, tapping the wheel impatiently. The edges of the mail peeked out of the sack, tempting her. She pulled it into her lap and riffled through the letters. The usual bills. The signal remained red.
Thumbing quickly through familiar envelopes, one unusual return address caught her eye, William T. Betts, M.D., Washaw, Michigan—the island village location of Aunt Jean’s cottage on Lake Huron. Although addressed to Lyra, it had been sent to where her aunt lived prior to passing away. She couldn’t place his name as one of Jean’s doctors. Multiple postmarks revealed a path of forwarding, the oldest dated last August, a few weeks after the funeral. She checked the traffic light—still red.
She ripped open the envelope and yanked out the letter.
Dear Ms. McCauley:
I am writing this correspondence in my capacity of Birch County coroner. Please accept my condolences for the recent loss of your aunt, Jean Perkins. Prior to delivery of her remains to the Michigan State crematorium, her attending physician, Dr. Everett Schultz, requested an autopsy. Dr. Schultz and I wish to meet with you to discuss my findings at your earliest convenience.
Respectfully,
William T. Betts, M.D.
A horn honked from behind and jolted Lyra into a panic. Her limbs froze and her eyes returned for another glimpse of the letter. She wildly scanned the page, searching for additional information. Aunt Jean had died of cancer. What more could they tell her than that?
At the time of Jean’s death, the abrupt change in her symptoms puzzled Lyra and made her question the visiting nurse. Hours before, her aunt’s mind had been lucid. Her eyes were clear and her breathing soft and steady, not a raspy death rattle. Now those initial concerns seemed grounded.

The driver behind her laid on the horn.
The noise jarred Lyra to the present. She exhaled an arrested breath. To brace her shaking arms, her free hand clamped the steering wheel. Unable to coordinate, her foot slid off the clutch and stalled the car.
A chorus of horns blared.
After fumbling with the ignition, she restarted and herded her Subaru into the stream of traffic. She locked her eyes squarely ahead to avoid angry road-rage stares from passing motorists.
One car pulled alongside and tooted. Her eyes shifted onto the driver who flipped her off before speeding away.
Shaking, she gave up rushing to be on time. Keeping her car safely on the road was challenge enough. She hung back to allow other cars to pass.
Plodding in the slow lane, her thoughts drifted to the letter. What had the coroner found? In September, the funeral home wrote, indicating they stored her aunt’s ashes, as Lyra directed, until she returned to collect them. The director never mentioned any question about the cause of death.
Lyra shifted before engaging the clutch. Grinding gears vibrated the car. White-knuckling the wheel, she gratefully turned at the sign for Southern University. Finally in her assigned parking spot, she slumped into the seat.
Before getting out, she reread the letter to search for clues between the phrases. She found none, but the words “earliest convenience” loomed. The doctor wrote the letter three months ago. Would that lost time make a difference?
Was it possible someone harmed Jean? Hundreds in the village visited the funeral and expressed sorrow. What about that strange man, Revelin? He came to Jean’s home, supposedly working as an aide from the home care division of the local clinic. He acted suspicious, trying to read Lyra’s computer screen, open to her draft of the new version of the Book of Dragonspeir. Maybe a person from Dragonspeir? A few supporters of the evil Black Dragon could enter her world. But who? His alchemist, Tarom, possessed enough power and talent. A chill ran down her spine, thinking of his glowing red eyes and crimson cloak with moving tentacles at its hem. She sighed. No obvious evidence linked either man.
Sun rays reflected light through her windshield from the modern glass and concrete English building. This alerted her to pull herself together and go inside. After sucking in a deep breath to steady her nerves, she opened the car door and stepped out. Her legs shook under her weight. Her shoulders sagged under the load of the briefcase and bags. With an awkward gait, she ambled toward her building.
She stopped cold. Students raced around her to make their classes. What about Eburscon? Alchemist for the Imperial Dragon’s Alliance. She clenched a fist, recalling his haughty, antagonistic manner. He openly disapproved of Lyra’s influence on anyone in Dragonspeir.
Opening a side door off the parking lot, she checked her watch. Five minutes past the start of class time. She braced herself, rearranged her bags, and climbed two flights—a short cut to the classroom which avoided the department offices.
Three minutes later, she arrived in the room, out-of-breath and shaking, in no shape to teach. But, the chairman kept careful tabs on all his non-tenured professors, including Lyra.
Thankfully, the lesson was an easy one, reviewing short story reading assignments. The students in her American Lit course, just returned from a long Thanksgiving weekend, didn’t want to hear a rigorous talk about Emerson and Thoreau. Most eyed her with groggy stares, heads propped on elbows. A handful of alert and prepared students vied to contribute, snapping out responses to Lyra’s discussion questions. Usually she enjoyed pitting them against each other, but today she merely appreciated their participation.
Her mind wandered two thousand miles away. She watched the clock, counting the minutes until she could talk with Cullen during his layover in Detroit.