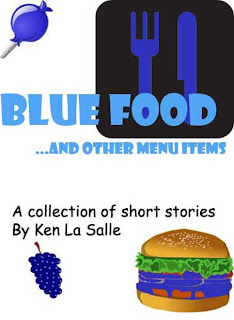 BLURB from Goodreads
The works of Ken La Salle range from the bizarre to the whimsical and even further beyond still. In Blue Food and other menu items, Ken La Salle treats you to a dozen tales, hilarious and deeply strange.You’ll be introduced to Blue Food and find out why it never seemed to catch on in America.You’ll meet Bigfoot’s Older Brother and find out just what it’s like to set Bigfoot up on a date.You’ll be learn about how the dead make the best matchmakers, even if they can be a bit unconventional.You’ll see for yourself just what the Problem With Swings is.You’ll read about how saving earth might be just the thing for a little girl with Muscular Dystrophy.You’ll be warned about Bobby’s Brother and his unusual habit.You’ll know just how to stop an invading horde with the proper use of pizza.You’ll delve into the mind of a madman whose madness is often served on a cone.You’ll read from the lost book of Houston with a story about when Jesus met the Soothsayers.You’ll encounter a strange married couple who would rather stay together if they can avoid killing each other.You’ll witness a great new game show: What’s My Afterlife!And you’ll finally find out the secret behind pheromones.Blue Food and other menu items is a little taste of craziness to lighten the soul – and it’ll only lighten your wallet a tiny bit. 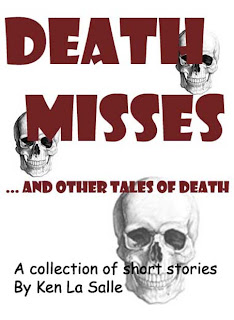 BLURB from Goodreads
These works by Ken La Salle range from the bizarre to the morbid and even further beyond still. In Death Misses and other tales of death, Ken La Salle treats you to a dozen deadly tales to keep you up at night.You’ll find out exactly what happens when Death misses and what lengths he’ll go to fix that.You’ll meet a scientist who has overcome death, though it might overcome him.You’ll encounter a man who can hear souls no matter where they are imprisoned.You’ll learn for yourself the incredible secret of Stewart Rollings Mott.You’ll find out just how much it costs to buy spiritual enlightenment.You’ll witness the birth of a new kind of creature, one who sheds light.You’ll find out when peeling isn’t quite enough for one man.You’ll accompany one helpful soul who is looking for a way out.You’ll know the terror that goes with an itch that is… just… out… of… reach…You’ll read about a very helpful car that even gives you your keys.You’ll sink inside the dreams of the dead.And you’ll learn exactly why dead… ain’t.Death Misses and other tales of death is a guided tour across the graveyard – but it’ll only bite you in the wallet a tiny bit. 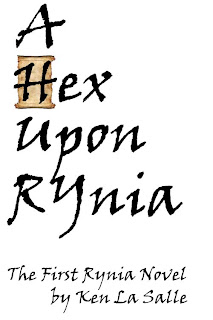 BLURB from Goodreads
Eight years have passed since the events of A Hex Upon Rynia. What the Rynians saw as a war of survival, Hex is shocked to learn was just a feint on the part of Tsurtor, Rynia’s sworn enemy. Now, he is ready to unleash his army of stone giants and dragons, tanks and jets, and impossible magic against the small nation of Rynia with only a few heroes to stand in his way.With Tsurtor pulling the strings, Rynia’s heroes are turned away quite simply. Ostrander, the earth golem, is off-planet. King Marcus is dealing with intrigue in another land. Vincent, the world’s youngest magician, has let adolescent rage ruin his magic. And Hex is imprisoned on Earth, facing multiple counts of murder!With the first book in the Sons of Rynia trilogy, Tsurtor begins a war that will forever change Rynia and those who will protect it. Will there be A Hex To Save Rynia? 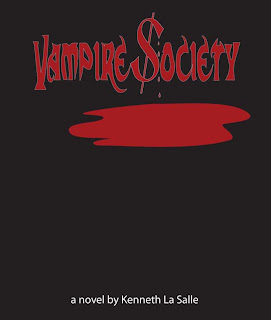 BLURB from Goodreads
Three kids leaving high school are faced with a world they'd hoped never to encounter. "You think you got any chance once you get outta here? You're nothing but grist for the mill, that's what you are! They'll feed off ya! They'll suck out everything you got and leave you dry." With these words, their eyes open to the Vampire Society in which they live.
Vampires live only to feed. Driven by their urges and desires, they are the ultimate consumers. And the Vampire Society is one that puts the Vampire on a pedestal.
Abby Ayrnes, the daughter of migrant workers, grows up knowing the price the vampire society demands. On either side are the angel and devil of the vampire society. Nathan West's admiration and desire drives him to be selfless. But it's Arthur Silvada, taking whatever he wants, who Abby finds she loves.
Vampire Society is a love story and an indictment against our culture, answering the most important question about love: Is real love possible in the Vampire Society?