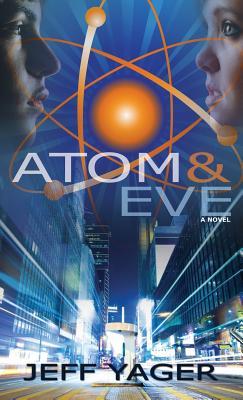 Set several years in the future, sixteen-year-old Ricky Romanello, a college freshman, is playing basketball when he collapses and winds up in a coma suffering from a powerful flu that hits the U.S. population causing deaths and a dramatic slowdown in the economy. Research scientist Dr. Mandy Fox has been developing an anti-aging drug that she believes could eradicate the flu. Ricky becomes one of the test subjects. But Ricky and others soon discover that an unintended side effect of the new drug and vaccine has catastrophic consequences for the entire population.

MY REVIEW
I received an e-copy of Atom & Eve by Jeff Yager from Edelweiss in exchange for my honest review.
The cover features two faces, one I would say is probably Ricky Romanello, and the other could be Dr Mandy Fox who invents the flu vaccine that should fix a problem flu, that really ends up causing many more problems. Also, the Atom drawing I'd presume, is a drawing of the medical format of the atom that forms the drug maybe.
I like the cover it is colourful and would attract my attention to it, so I'd say it's doing it's job well. The title is short and catchy, I get the "Atom" part is the reference to the vaccine but I'm not so sure where the "Eve" part is from.
So do I like the cover? Yes I'd pick it up from a bookstore shelf.
So now to the book, Mmm what can I say? The basic plot is that a young man called Ricky gets a new strain of flu. The flu is spreading on a pandemic level and scientists are desperately working to find a vaccine/cure. Dr Mandy Fox is a chemist who has a drug that should cure the flu but unbeknownst to her colleagues she tweaks the medication herself. The drug is tried on a friend of one of the other "scientist/chemists" and it works, the government allow it to be trialed on another ten people whom it cures. Even though the drug is relatively new it is given out to all who have the flu with disastrous consequences. There are side effects that become apparent where women start behaving more aggressively and "male dominant" and the males who have the vaccine seem to develop their "softer" side and want to follow a more feminine role in life. The book then features other characters and how the drug has and is affecting their lives.
The concept of the story is quite good and I liked the main plot line of that, with the mystery of the drug and it's potential side effects. I just felt that when the other characters were brought in to tell their stories they didn't feel cohesive it felt like a group of short stories about the characters collected together. The book could do with a little tweaking and tightening up a little. I think the book is aimed at the adult genre as though it does not go into gruesome detail but gang fighting and rape are both featured more than once in the book.
So did I enjoy the book? Being totally honest, I did enjoy some parts, the discovering the drug etc. But on the other hand I didn't enjoy the violence depicted in it. That's more of a personal taste issue. Probably a male reader would be more suited to this book. Would I recommend the book? Perhaps to an older male reader as I think due to the gang violence it may put off the female reader. Would I read a BK#2? Probably not. Would I read other titles by this Author? I would take a look at the blurb on the individual title before deciding.