THE OUTSIDE - THE HALLOWED ONES BK#2 BY LAURA BICKLE 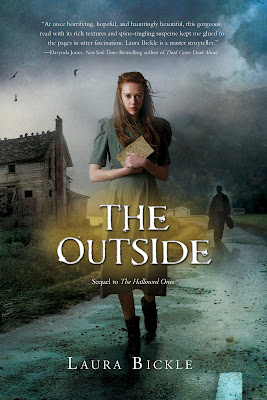 The hard part about the end of the world is surviving it, surviving when no angels scoop you up to fly you away to heaven. God doesn’t speak. But I kept asking.

My breath was ragged in my throat, my voice blistering around the words of the Lord’s Prayer. I spoke in Deitsch, the way my people always did when we prayed. It didn’t matter if evil understood me, only God.

I opened my arms, my coat and dark skirts flapping around my legs and wrists. I stared out at a field, holding a sharpened pole in each fist. One had been a garden hoe in a previous life and the other a shovel. The metal had been stripped from them, but they were still tools. Weapons. A crumpled piece of paper was fastened to my chest with straight pins, the writing growing faint and illegible in the gathering darkness.

I strained to see into the night. Shapes seethed. I knew that something terrible was out there. The bullfrogs had stopped chanting and the late-season crickets had gone silent. I heard crunching in leaves, saw something shining red.

My knuckles whitened on the wood in my hands.

My head snapped around, my bonnet string slapping my chin. I could see two familiar figures retreating behind me. A short, round woman scurried through the field. Her platinum hair was bright against the night, almost appearing as a moon bobbing along churning water. She reached a nervous white horse who was pawing at the earth, clambered clumsily onto its back. Between her and me, a lanky shadow in a dark jacket gestured at me with white hands. Alex.

Bonnet. That was Alex’s nickname for me. My real name is Katie.

I saw Alex taking off his jacket, wading through the grass toward me. I swallowed. That meant that he sensed the same thing I did, that the hair also stood up on the back of his neck, that he was ready to fight.

He stripped off his shirt. My heart flip-flopped for a moment and my grip on the stakes slackened for a fraction of a second. His pale skin was covered by black sigils that seemed to blur in the twilight. It was cold, but for them to work well, the creatures pursuing us needed to see them —the same reason I’d pinned the petition to God to my chest.

I worked the prayer through my teeth, one eye on the horizon, at the roiling shadows in the east.

“Damn it, Bonnet.” He grabbed my elbow. He tore the white bonnet off my head, stuffed it into his pocket.

“This thing makes you a target. I could see you from all the way back there.” He stabbed a thumb at Ginger’s retreating figure on horseback, melting into the grass. “It shines like a beacon.”

I lifted my chin. “Ja. Maybe it should.”

This was an argument we repeated often. Though the end of the world had come, I adhered to the old ways. I was born Amish, and I would die Amish.

But hopefully not tonight.

Alex’s eyes narrowed and he looked over my head. I could feel his hand grow cold through the sleeve of my dress.

Alex pulled me back, back into the tall grass disturbed by a breeze.

My breath hissed behind my teeth:

Want to read more? I know I certainly do! well here is the link you need to purchase your own copy!