CHARACTER BIO'S - THE STORM AND THE DARKNESS BY SARAH M CRADIT 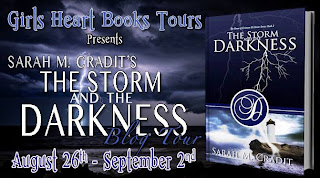 Anasofiya Deschanel (30)- Ana is aloof, withdrawn, and considered by some even to be cold. In reality, she lacks the ability to connect with others in any meaningful way, with the exception of her cousin and lifelong confidante Nicolas. After she makes a terrible mistake in New Orleans, she flees for Maine in an attempt to protect everyone involved. For the first time in her life, she has kept something from Nicolas, who suspects that she is not being completely forthright about her reasons for leaving.

Nicolas Deschanel (30)- The cocky, brash, f-bomb loving cousin of Ana. He is single, with no intentions of changing that, instead enjoying the company of a different woman every night. Being the son of the late and venerable Charles Deschanel, his incomparable wealth allows him to live any lifestyle he wants. The truth, though, is that Nicolas has never found anything interesting enough to occupy his time. Nothing that gives his life meaning.

Jonathan St. Andrews (32)- Jon is the oldest St. Andrews brother. He is the reclusive, and sometimes rude, veterinarian of the small community of Summer Island. Showing an aptitude for medicine, like his father, in his youth, he instead abandoned it for veterinary medicine. He is very wary of Ana’s arrival on the island, afraid he might have to interact with her as her neighbor. Truthfully, though, Jon senses a similar darkness in Ana that scares him.

Finnegan St. Andrews (27)- The younger St. Andrews brother, Finn is easy and carefree, the opposite of his brother Jon. He spends his days on his boat, supplying lobster to many of the local Maine communities. Unlike Jon, he is immediately intrigued by Ana, whom he sees is not like the other girls he’s been with. Where Jon seeks to push her away, Finn is eager to get to know her.

Colin “Oz” Sullivan (30)- Kind, sensitive, thoughtful. Oz is connected through the Deschanels both through his lifelong friendship with Nicolas, but also his marriage to Nicolas’ younger sister, Adrienne.

Alex Whitman (50s)- The odd, middle-aged caretaker of Ana’s home. Very little is known about Alex’s personal life, except for the fact that his parents were brutally murdered when he was a child. Theirs are one of several unsolved murders on this small island.

Augustus Deschanel (60s)- The sharp, clever businessman father of Ana. He built his media empire out of nearly nothing, despite having the Deschanel resources at his disposal. His wife, and Ana’s mother, Catherine, died giving birth to Ana. Catherine was the only woman he ever felt a passion for, and his second marriage, to a woman named Barbara, was sought for more practical reasons. Augustus is not comfortable in expression, and so his relationship with Ana is often strained.
Posted by Jeanz xx at 13:00