EXCERPT - IT WAS YOU BY ANNA CRUISE 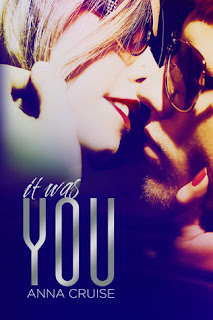 It Was You by Anna Cruise
Excerpt
He smiled down at me and once again pushed the hair away from his face. For one ridiculous minute, I wished it was my hand weaving through those long, black locks.
“Abby Sellers, I am very sorry if I came off as rude,” West said. “Chalk it up to my having a bad morning. I'll try not to let it happen again.”
His gaze was so focused, so intense, and I felt like I couldn't look away.
“Thanks,” I said and then wished I could kick myself. Where was a witty response when I needed one?
He leaned up against the closed trunk of my car. “But now you owe me.”
“Owe you?”
He pointed his finger toward the pavement. “The tire?”
“You want me to pay you?”
He squinted, then shook his head. “I was thinking of something a little less formal.”
“You didn't mention a fee,” I said. “I could've called AAA for free.”
“True,” he said. “But you'd still be waiting. And your friend over there would really have some explaining to do to her mom.”
Tana was about ten yards away, gesturing like crazy, clearly not happy.
“And you wouldn't have gotten my awesome apology,” he added.
I smiled and shook my head. He was impossible.
“What did you have in mind?”
He thought for a moment. “I think your phone number will do for now.”
My heart fluttered and I tried to keep my tone light. “Why? So you can call for payment? Take my credit card number over the phone?”
He laughed. “Maybe. But you give me your number, we'll call it even.” He produced a phone from his pocket. “I'll put it right in here for safe keeping.”
He was so arrogant, so sure I'd give him the number. Part of me wanted to rattle off a fake number, just to piss him off. But he had just changed my flat tire and he'd apologized for earlier. And it certainly didn't hurt that he look like an Abercrombie and Fitch model. I didn't think he'd actually call me. And I wasn't entirely sure I wanted him to.
“And if I don't?” I asked.
He leveled those blue eyes on me and pursed his lips, a slight frown creasing his features. “Then we'll both miss out, won't we?”
“Miss out on what?”
He shifted against my car, hitching his fingers in the pockets of his shorts. His eyes found mine again and he smiled. “I don't know. But I'm pretty sure we'll be missing out on something if we just walk away. Something big, Abby Sellers.”
My stomach fluttered again and I could feel the heat of anticipation rise up inside of me.
He held up his phone. “Number?”
I hesitated for only a second before giving him the number. The right phone number.
He tapped at his screen. “I probably should've made you promise to answer it when I call.”
A little thrill ran through me when he said “when” rather than “if.”
“Yeah,” I agreed. “You probably should've.”
“But I think you will,” he said.
“So sure of yourself,” I said. “Maybe I am one of those chicks who looks down her nose at everyone here.”
He shoved his phone back in his pocket and stepped in closer to me. I made a concerted effort to take a step back, to not breathe in the scent of his shampoo, to not get lost in those blue eyes that were boring into me.