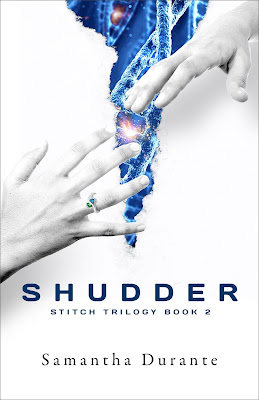 Alessa looked back to Isaac, who was crouched and picking among the broken glass.  She watched him slip something into his pocket, but before she could ask what he’d found, a loud bang echoed from down the hall ahead of them.
Isaac looked up at her at once and they both froze, waiting.  The tension of the silence clotted in the air as Alessa held her breath in suspense.
When no other sound came, Isaac stood tentatively and inched over to Alessa, placing a gentle hand on the small of her back and motioning ahead with a nod.
She pointed the flashlight in the direction of the sound and they set off with quiet footsteps in search of its source.
As they reached the department store at the far end of the hallway, they paused, staring into the blackness beyond the threshold.  Alessa gripped the flashlight and felt Isaac’s hand slide on top of hers, the pressure of his fingers pointing the torch downward and flicking off the light with a click.
They were plunged into night.
They stepped tentatively into the dark room and gave their eyes another moment to adjust.  From what Alessa could tell, it seemed the clothing racks had all been pushed to the sides, leaving a big open space in the center of the room.
She took another few steps to get a better look.
And that’s when it hit her – an abrupt slam in the face as if she’d pivoted into a wall of brick, and the full-body crash of a tidal wave of pain.
Alessa sunk to her knees, a soul-crushing rush of sorrow and terror flooding her consciousness and draining every ounce of strength from her body.
Like a blow to the gut, the air raced from her lungs and she crumpled over, her face smacking against the cool linoleum of the floor.
A thousand images flashed before her eyes, people and places she didn’t recognize jumbled with thoughts and feelings that she knew were not her own.  Alessa squeezed her eyes shut, her mind pressing outward against the onslaught barraging her senses, but it was no use.
The torrent pounded through her, raging.  Helpless against it, Alessa poured her concentration into the only thing she could think to do – the simple act of breathing.
In, out.
In, out.
In, out.


She drank each shallow breath and waited in agony for the deluge to end.

a Rafflecopter giveaway
Posted by Jeanz xx at 14:30